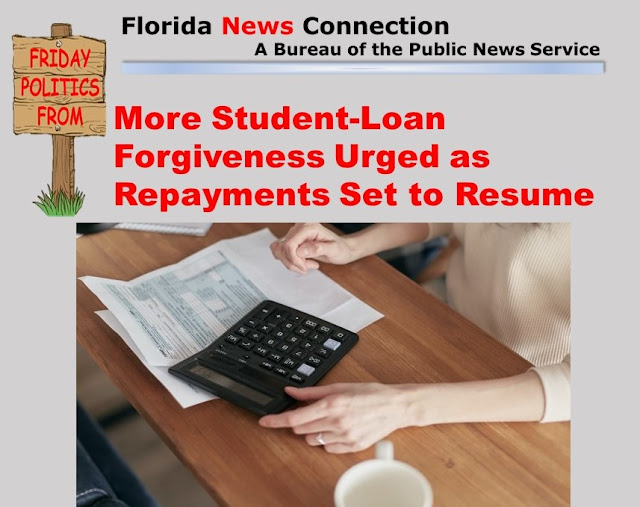 TALLAHASSEE, Fla. - As more than 200 organizations call on the Biden administration to extend the pause on student-loan repayments, some borrowers are finding success through the Public Service Loan Forgiveness Program.

The Biden administration's approach to student-loan relief so far has been on improving or expanding a handful of programs that already were on the books, even as advocates press for the campaign promise of canceling $10,000 in student debt per person.

Susan Garcia is a professor of the New World School of the Arts at Miami Dade College, who said she was able to see her loans forgiven in the modified program for educators, nurses and public employees who give 10 years of service.

"It is $92,000 of payments that are being forgiven, that have been forgiven," said Garcia. "And for me that is, like, incredible because I'm, like, 58 years old, headed toward retirement, I have a 17-year-old son who is looking to go to college and trying to figure out how he's going to do that."

Garcia is encouraging others to take advantage of the now-streamlined program which, according to the education department, already has forgiven $2 billion dollars in debt. The pandemic moratorium on federal student loans is set to expire after January 31.

Garcia said the student-debt crisis is real. She credited organizations such as the American Federation of Teachers for pushing for reforms to make it possible for her loans to be forgiven, which started out at around $120,000.

"Don't get me wrong, it wasn't like I didn't make payments," said Garcia. "I paid over $148,000, mostly interest only since I separated from school."

One major change to the Public Service Loan Forgiveness program allows all payments by student borrowers to count, regardless of loan program or payment plan. That waiver runs through October of next near.

However, a survey by the Student Debt Crisis Center found that 89% of fully employed student loan borrowers said they were not financially secure enough to resume loan payments on February first.