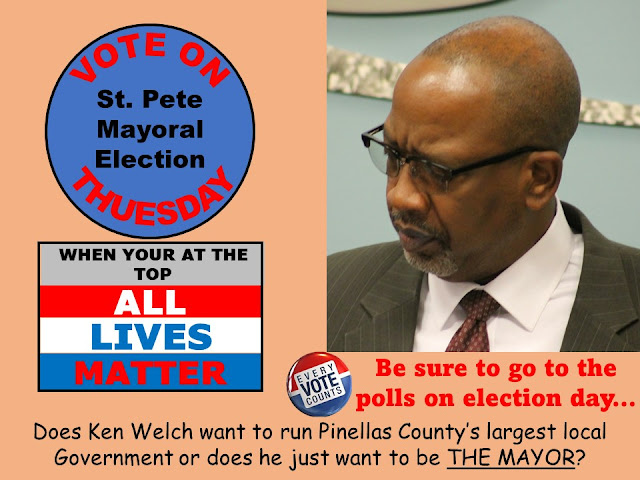 There is no doubt, that Ken Welch is a dedicated politician and public servant. He spent 20 years or so serving as a member of the Pinellas County Board of County commissioners and has been active in Pinellas County politics for every one of those 20-years.

In fact, the hardest problem in dealing with Ken Welch was to get him to honor Pinellas County's term limits, which went into effect years ago, and he has continued to ignore like several of his County Commission contemporaries.

So, it's tough to argue that Ken Welch is not the consummate politician, he does what is best for Ken Welch.

The question is, can Ken Welch shed the professional politician role and turn into the leader/manager of a 2500 employee public business serving over 250,000 citizens?

St. Pete has had a mayor for the last eight years that struggles to look past 34th Street to the West and North across 18th Avenue to see the rest of the city and its needs.

Ken Welch wants to be mayor of Saint Petersburg first, simply because he wants to be mayor. Welch has always enjoyed the political limelight and there will be no place where the limelight shines brighter in Pinellas County for the next four years than in Saint Petersburg as it goes through the issue of redeveloping downtown and dealing with the Tampa Bay Rays and their stadium issues.

The real questions are:

Saint Petersburg is a cosmopolitan city. It has growing Hispanic and Asian communities along with the traditional white communities and African-American communities. Don’t they all, deserve a fair shake and maybe a banner on the wall? 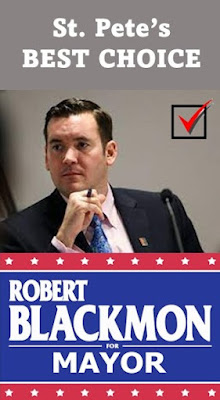 Can Ken Welch really be a mayor for all of Saint Petersburg?


Before you step up to the voting booth and check Ken Welch for mayor, ask yourself these questions and then ask yourself this one: what has Rick Kriseman done for me in the last eight years? Whatever your answer to that question is you can bet Ken Welch will do less.

If you really look at Ken Welch’s political rhetoric in this mayoral campaign, what you see is a careful pandering to the needs of select and oftentimes very loud groups in Saint Petersburg, but with no clear eye to serving those who sit quietly by year after year in northeast, northwest and southwest Saint Petersburg paying their property taxes and waiting for the city to recognize that they exist.

Saint Petersburg needs a mayor, who can see all the way across town, from Tampa Bay to the gulf beaches. I think Robert Blackman is the right man for the job.

From the Blackmon Campaign Web site:” I’m Robert Blackmon, and I think St. Petersburg needs a fresh start and a new face leading our city as mayor. I’m a small-business owner, and I’ve served as a City Council member. With experience both in the private sector and as an elected official, I know we can make local government work to better serve our community. I’m not a career politician, and I want to make St. Pete a shining city on a hill.”