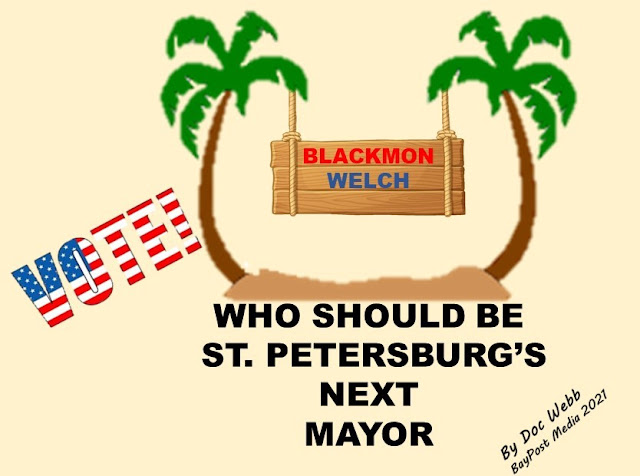 One of St. Petersburg's most important elections will take place on Tuesday November 2, 2021.

The polling on the race shows former county commissioner Ken Welch with a decent lead over the other major candidate Robert Blackmon.

So, it's time to start asking the question is Ken Welch the best candidate for Saint Pete mayor?

In fact, one of the primary efforts of Ken Welch during that time was quietly avoiding the term limit rules put in place by the county Commission. Commissioner Welch always seemed to have a platitude and or response when questioned about his multiple terms.

There's a big difference between being a county commissioner and being a mayor of a city the size of Saint Petersburg. One of the legitimate questions that should be asked regarding Ken's ability to serve in this capacity is whether he possesses the ability to transition from politician to chief executive officer, leader and manager of an organization of over 2000 people.

Of course, that same question can be asked of  both of the candidates currently running for mayor. There isn't a well-seasoned businessperson among them.

The Mayor's race, as are all the City Council races, are reasonably nonpartisan. But don't let that throw you. Partisan politics always manages to rear its ugly head in these races sooner or later.

St. Petersburg is at a crossroads .

Welch represents the past with not much sensitivity for the future as was demonstrated in Black Lives Matter background debacle. I would expect Welch to spend most of his energy looking south and back, While I would expect Blackmon to have a much more wholistic view of St. Petersburg.

Blackmon, on the other hand has the necessary business acumen, but may struggle a bit with the politics.

Looking at the issues, Rays Baseball, a split baseball season,  the redevelopment of the Tropicana Field site, low land flooding, rising crime, a Police Chief that needs to be replaced, waste water treatment problems and a host of other issues, all of which have existed for a while, looking for solutions from the past will likely lead to more of the same.

If St. Petersburg wants to end up 4 years from now slightly worse off than it is now, then Welch is the guy.

If the idea is to move forward then Blackmon makes the most sense.

No matter what your view go vote. This mayoral election could well be decided by a hand full of votes, make sure yours is one on them.