The Fourth Baseball Season - It's Back in Tampa/St. Petersburg Again 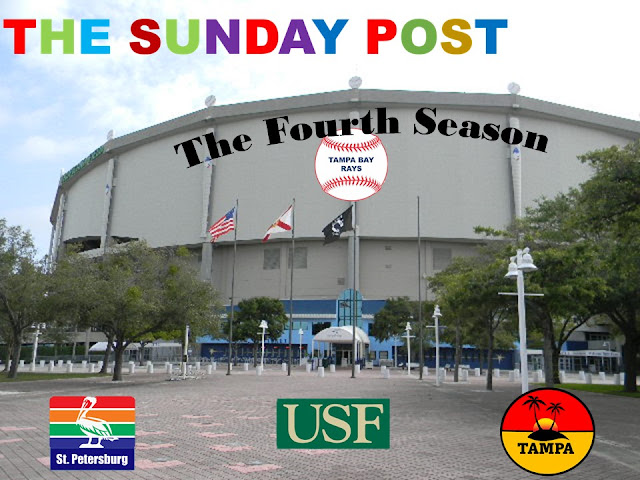 Generally, baseball consists of three seasons, there's spring training, the regular season and the playoffs, including the World Series.

However, in Saint Petersburg the Tampa Bay Rays baseball season includes a 4th edition. It's the season of baseball, that asks the question, "How the Rays and their organization want to deal with the Tropicana Field issue and where the team will end up playing."

This 4th baseball season probably most aptly titled, "Where will the Rays really go," plays out as the Rays organization suggests oftentimes strange solutions to the team’s historic low attendance problem.

It's always been amazing how poor the attendance at Tropicana Field continues to be. Regardless of how well the team does or does not do the Rays attendance figures tend to linger significantly below all of baseball's average figures for attendance.

Former Baseball Commissioner Bud Selig said decades ago, “This (St. Petersburg) is just not a major-league baseball market.” His words still hang over Tampa Bay Baseball like a dark cloud and especially so if you are being asked to pony up a ton of money for a new stadium.

Suggestions from the Tampa Bay Rays organization have ranged from pleas for a new stadium to the continuing saga of a split season between Montreal and somewhere in Tampa Bay.

Check out from the Tampa Bay Times By Charlie Frago: Tampa Bay Rays seek to open minds on Montreal while clock ticks.

The idea of a split season has been an ongoing saga for the Rays for the last few years.

Once again, as in all these stadium site deals, this one appears pretty interesting. Since the concept now seems to be leaning toward a new stadium in the Bay area along with a new stadium in the Montreal area both open air and both a little bit smaller. Finally, some common sense is starting to prevail.

Referring back to the Bud Selig comment above, the question still lingers is the Bay Area even a 1/2 season Major League Baseball market?

It will be interesting to see, if Hillsborough County, Tampa, and the big-money players in the Bay Area are willing to go along with a 41-game season for the cost of a small stadium.

Regarding the Tropicana Field site in Saint Petersburg, the most interesting development recently has been the sudden interest on the part of the University of South Florida in participating in the redevelopment discussions for the property.

Just in case you missed it, here is a report from the Tampa Bay Times By Divya Kumar USF tells Kriseman it wants a seat at the table for Tropicana Field redevelopment.

In a letter to St. Pete Mayor Rick Kriseman, interim President Rhea Law and regional Chancellor for the St. Petersburg campus, Martin Tadlock said, “The concept of a Tech Campus as part of the development of the Tropicana Site is a major opportunity for our university,” the letter said. “We are committed to working closely with the City of St. Petersburg and the selected developer in the fulfillment of these major economic opportunities. The importance of workforce development, higher education, medical research and innovation are all key factors in our decision to participate in this process.”

I have long been in favor of moving the Tampa Bay Rays out of the Tropicana Field site, and a complete redevelopment of that area focused on the next two or three decades.

There are a lot of competing voices for a piece of the pie in the redevelopment of the Tropicana Field site, but those decisions should not be based on attempts to mitigate past social ills but on a significant look to the future.

Saint Petersburg’s new mayor, whomever he may be, needs to think carefully about the approach to the redevelopment of the Tropicana Field site. A new fresher look at development options and not just a strict adherence to the plans developed by the current Kriseman administration.

While fraught with political issues from the Board of Regents all the way down to the Saint Pete City Council, the involvement of USF could really put the future look on this development.

I think the last thing Saint Petersburg needs downtown is a meandering district of high-rise condominiums and apartment buildings focused on increasing population density, as opposed to a focus looking at developing a center of commerce, living, and education for the future.