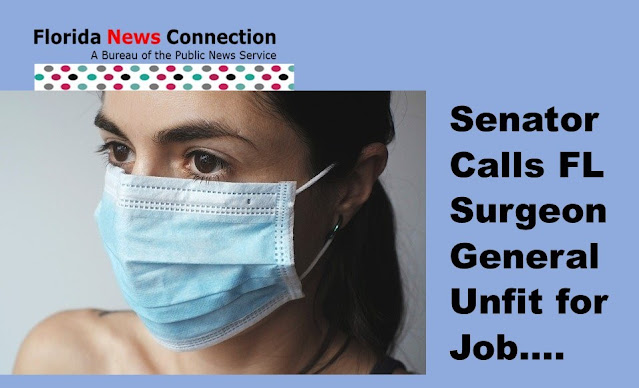 TALLAHASSEE, Fla. -- Florida's surgeon general Dr. Joseph Ladapo is facing bipartisan rebuke for refusing to wear a mask at the office of a state senator who told him she had a serious medical condition.

Sen. Tina Polsky, D-Boca Raton, said Florida's top health official requested to meet with her in August as he seeks confirmation, but she had not yet made public her breast cancer diagnosis. All she asked of him was to wear a mask, and he refused. She asked him why he couldn't wear a mask, and she said he wouldn't answer.

"More important for him to take a stand against masks than to put a piece of fabric over his face for ten minutes to talk to me, and he is just unfit to serve in that position, so I wanted people to know," Polsky stated.

Sen. Wilton Simpson, R-Trilby, president of the Senate, sent a memo to senators Saturday in support of Polsky, saying the encounter "was unprofessional and will not be tolerated."

The surgeon general's stance is no surprise since he is opposed to mask mandates, and he has called into question the safety of COVID vaccines.

Polsky has stage-one breast cancer and said she is very concerned for the well-being of those with compromised immune systems, including Gov. Ron DeSantis' wife, Casey, who announced her own breast cancer diagnosis earlier this month.

Polsky said getting COVID would mean having to skip critical treatments.

"I want her to please be very, very careful so that she can get her treatment in a timely manner," Polsky stressed. "And I would say to the governor, please don't put an anti-science person in as our number one public health professional."

A Department of Health spokesperson confirmed the meeting but said Ladapo did not make the comment. Lapado's actions are being criticized by Democrats, who say he should not be confirmed.