Stop the Gaslighting! NO SalesTax Hike Is Needed to Fund Road Maintenance in Hillsborough County 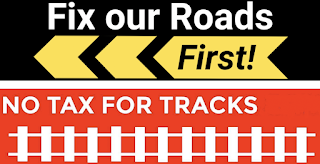 In Dr. Davison's last post we showed how the Hillsborough County Public Works department knowingly watched our road infrastructure deteriorate to the deplorable and unsafe condition we find them in today. The county administration has known through the computer modeling equipment they have had since 2009 what was happening. They refused to tell the public, and to some extent the elected officials, where we were headed or provide funding to avoid it.

Now the County begins to officially pursue another $16 billion dollar sales tax hike boondoggle through another proposed 30 year sales tax referendum....before one cent of the unlawfully collected $512 Million unlawful All for Transportation rail tax boondoggle has been refunded.

The County is attempting again to falsely create hysteria that 20% of our existing roads will be in poor or worse condition unless taxpayers fork over more of their hard earned dollars. THE ONLY PLAN THE CURRENT COUNTY ADMINISTRATION HAS FOR IMPROVING TRANSPORTATION IN THE COUNTY MEANS YOU MUST PAY $16 BILLION MORE IN TAXES.

Although the group All For Transportation (AFT) was given credit as the architect of the Unconstitutional and illegal sales tax it was the Hillsborough County Metropolitan Planning Organization, now known as the Transportation Planning Organization (TPO), who laid out the spending allocations found in the sales tax. It was the TPO’s spending allocations AND their calculations that All For Transportation used in selling the plan to the public. Calculations on road and bridge maintenance, congestion, commute time and safety were used to sell the plan to the people, to give them hope that transportation in the county would get better.

There was no greater champion for the sales tax and the infrastructure plan than TPO director Beth Alden. We reported in 2018 that Alden may have crossed an ethical line with her actions of support for the massive AFT rail tax boondoggle.

Since the sales tax was declared illegal and unconstitutional in February, Alden is on record telling the public and the media that road conditions will deteriorate. She claims if new revenues are not allocated the backlog in road and bridge maintenance will grow from $80 million to $1 billion. Alden is a Central Planner, not a Transportation or Engineering expert. Does her planning live up to what she is telling the media and public?

Alden never spoke up or said one word when the Tampa Centric Five Hillsborough county commissioners ended the $832 million County Transportation Policy this year. That Transportation policy funded County infrastructure at levels suggested in the MPO 2040 LRTP. Such dereliction of duty should cause someone who is a Director of the Transportation Planning Commission to be fired.

The County tried to create hysteria in 2015-2016 when they launched the proposed half cent Go Hillsborough rail tax hike. Ironically, right before the Hillsborough County public hearing where the county commissioners voted down placing the rail tax boondoggle on the 2016 ballot, the County Administrator REMOVED Maintenance from being funded by the proposed tax hike.

Now Alden is out trying to create hysteria that without a $16B new sales tax hike, the County cannot maintain its roads. However, in analyzing the Hillsborough TPO's own 20 year 2045 and 2040 Long Range Transportation plans, we find her claims to be untrue.

According to Alden's own documents, the difference between Current Trend funding WITH OR WITHOUT the 1% $16 Billion sales tax hike for Road and Bridge Maintenance is only $8.6 million a year or about $172 million over 20 years. The difference of $8.6 million can easily be solved with current growing ad valorem property tax revenues and proper budgeting priorities with NO tax increase needed.

Alden is not just bending the truth, she is lying to the public. Perhaps Alden is trying to lay the groundwork as the Tampa Centric Five begin to officially push for AFT 2.0 rail tax boondoggle to be placed on the 2022 ballot. The County has scheduled these Four so-called Transportation Town Hall meetings:

Alden is a Tampa Centric transit activist. Alden's TPO Organization Policy Committee, which only includes elected officials who are transit activists, spend entire meetings, like they did on Tuesday September 14, pushing costly rail/transit and outdated stack and pack Transit Oriented Development. Especially post-pandemic, they are totally out of touch with reality.

The level of incompetence regarding the transportation issue and disregard for reality in Hillsborough County is astounding.

But the level of deceit and gaslighting is unforgivable.