Grumpy Governor Or Just Simply A Bully - DeSantis Marches On 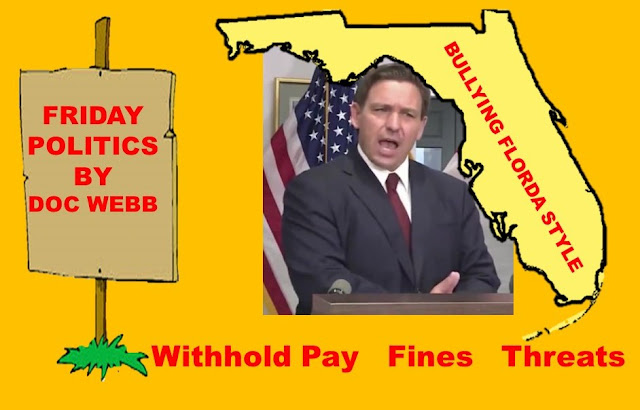 Opinion by:
E. Eugene Webb PhD
You often hear the comment made about an individual, "That he or she marches to their own drummer.” Well, it seems Florida's Governor Ron DeSantis is marching to his own drum core these days.

From threatening to withhold salaries from school board members and school district administrators to proposing to fine businesses for violating Florida's vaccine ban, the Governor seems intent on taking a hostile, bullying approach to dealing with people trying to protect themselves from the coronavirus and its variants.

For some additional information check out these online articles from Forbes and Fox News:

It's not too surprising to see the Governors' approval rating dropping as he continues to use brute force in an attempt to apply rules and regulations that seem archaic if not draconian in nature when it comes to dealing with the COVID issue.

The Governor seems to have forgotten that he's a public servant not a public master. Over inspired by the Trump era of forceful action, DeSantis has overstepped the bounds of common sense in his irrational dealings with local officials and businesses that simply want to protect their staffs, their customers and in the case of the educational system the teachers and the students.

I don't think the average person on the street who is watching all of this unfold views the Governor's actions as leadership as much as they view it attacking those with whom the Governor has differences.

The courts have handed Governor DeSantis a defeat over the mask mandate issue and yet the Governor continues to waste valuable time mounting legal challenges against his defeat in the court system.

I think it would make more sense again to the average person who's watching all this happen if the governor spent his time trying to help resolve the masking problem rather than fanning its flames and wasting money in a disagreement with the court system.

As the political season plays its way out, all these actions are going to come back to haunt DeSantis on the campaign trail. For now, the Governor's political adversaries are taking a cautious approach to their dealing with how the Governor is handling these issues but look for that to change very soon.