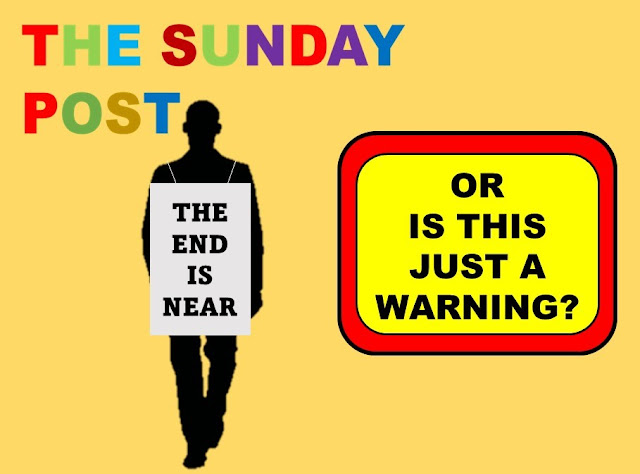 Events in the last two years have been truly startling.

There was the election fiasco, which nearly tore our country apart and has created continuing deep political divides. Then there was the onset of the COVID-19 virus. Over politicized, downplayed, mismanaged, and as we watched the world became engulfed in a viral pandemic.

Then there was the 2nd wave of the COVID virus called the delta variant. Once again, over politicized, downplayed, mismanaged, and as we are watching The United States and much of the rest of the world is becoming completely engulfed by yet another version of this invasive virus.

Then, we have recently experienced the complete collapse and downfall of the government in Afghanistan which the United States spent billions of dollars creating, arming, equipping, and propping up and all of this occurred in just a little over 30 days.

But certainly, something is trying to tell us something.

What fascinates me about all that we've seen in the last 30 months is not so much the magnitude of the disasters Covid-19, fires, earthquakes, hurricanes, governments collapsing, it's the rate at which these things are occurring. Despite all of our knowledge, technology, and military capacity, we don't seem to be able to affect the rate at which these events occur.

Usually in world events, there is a rhythm or a cadence to the things that occur on a global basis and history often provides us a glimpse into the future as we compare current events with past events. Such does not seem to be completely applicable in the season that we're currently in.

It's difficult to believe in today's modern world with all our technology, ability to gather information, that a government can fall completely in just over 30 days after spending 20 years establishing itself.

In science, and mathematics we often look past the event and put more attention on the rate at which it happens.

For example, massive events that play out over a longer period of time are much easier to manage and cope with than events that are catastrophic and occur with a moment's notice and are complete in a short period of time.

The rate of occurrence of disastrous consequences is increasing despite our best efforts.

One thing is for certain, if we haven't learned anything else in the last three years, or so we should begin to understand that as humans, we're not in complete control of what happens on this planet.

Most of us have seen the cartoon with the guy carrying a sandwich board over his shoulders, a Bible in his hand and the sign says, “The end is near.”

If you'd like a biblical perspective let me point you to two books in the Bible. The first one is Daniel in the Old Testament, and the second is revelations the last book in the New Testament.

Further exacerbating all of this is  a growing lack of faith and an increasing level of distrust in our fellow human beings. There are a lot of people who would like to draw the lines of this distrust along ethnicity, skin color, or other differences but the fact of the matter is a lot of us just don't trust each other regardless of those issues.

And are growing distrust of government at all levels from the school board to the White House isn't helping much at all.

I didn't come to this Post with an answer, or even a suggestion for that matter. I'm merely raising the issue that the rate at which things are beginning to decay in our country and worldwide is a cause for major concern.

Sooner or later, some country, despot, or other individual is going to figure out how to take advantage of all of this, and I'm confident the results of that event will be truly catastrophic.