COVID-19, Governor Ron DeSantis and His Own Florida Sinkhole 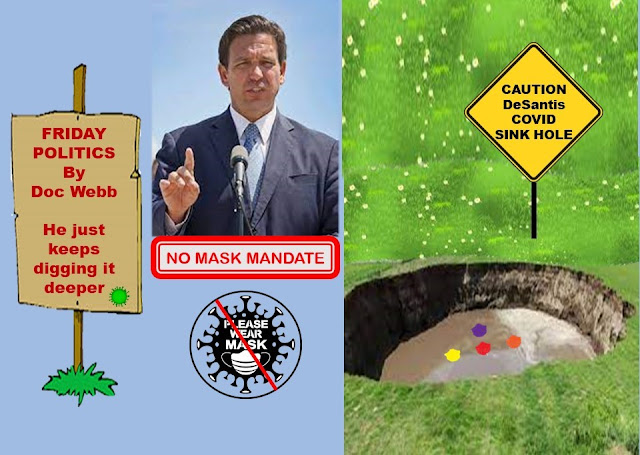 Governor Ron DeSantis has continued to expand his own personal version of the Florida sinkhole for the past week.

Doubling down, on his “no mandated masks” the governor continues to make national headlines as someone who openly defies the reality of science and the practicality of protecting Florida’s children.

Check out this article from The New York Times By Patricia Mazzei: As Covid Surges in Florida, DeSantis Refuses to Change Course.

Governor DeSantis and the Florida Board of Education have thrown local County School boards into a hysterical disarray of poor choices, bad decision making, political intrigue, and protecting themselves and their district’s revenue flow by threatening everything from withholding funding to withholding salaries of school board members and school district administrators.

In many ways, this could look like a schoolyard fight between a couple of groups of children who just genuinely don't like each other but, in this case, there is so much more at stake.

The scientific and medical facts that this pandemic is spreading rapidly through schools, including both students and staff is a documented reality.

Still, mostly for political purposes, I believe, the governor and his resident pet in kind, Richard Cochran, continue to use the Florida public educational system as a political football to curry favor with the anti-vaxers and the conservatives on the far right.

In this case, the school boards, and their leadership, both political and hired, face a dilemma that they really shouldn't be dealing with. And it's not necessarily just COVID-19.

Lost in all of this are the kids. There are those that would be just perfectly happy to go to school, wear their mask, get their education, go home at night, do their studies, and act like kids normally act. Then there are some, probably most notably the children of those you see on television screaming about you can't force my kid to wear a mask, who want to openly challenge the school board and educational administration system over something that borders on insane.

For years, there have been dress codes, in many cases uniforms, and many other rules and restrictions implied and imposed by the educational system to further the educational environment.

It seems almost impossible to believe that these people consider their little darlings so sensitive that wearing a mask will somehow affect their ability to learn and their psyche as human beings.

What most of these children are going to look back and finally figure out is that their parents, we're idiots.

They would propose to put at risk everybody else in the educational system for the sheer benefit of their child to sit in their seat no mask, grinning defiantly at their teacher.

All of this we owe to the governor of the state of Florida: Ron DeSantis.

The governor opened this sinkhole, and he keeps digging it bigger and deeper. We can only hope it finally swallows him up.