Will Biden Jump into The Regime Change Business in Cuba? 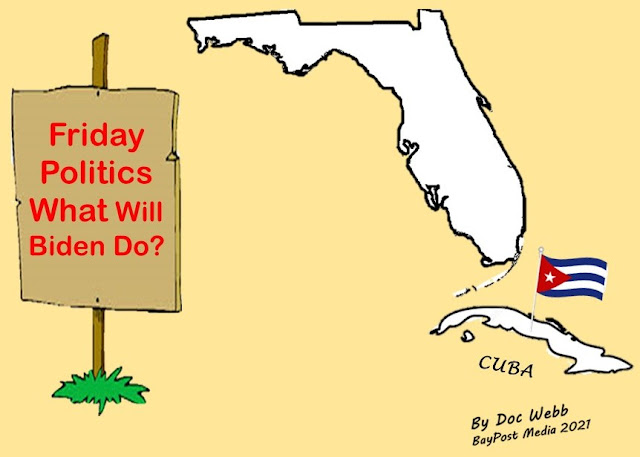 Things have been unraveling in Cuba for some time now. While it didn't all begin with the Trump-imposed sanctions, they have certainly been instrumental in creating the situation, and the strife associated with it that has resulted in the recent protests.

The political, social, and human rights issues associated with what we are now seeing in Cuba are not only complicated, but they have a long history dating all the way back to the Castro takeover of the Cuban government.

The political power of Cuban Americans, especially in South Florida has always been a major stumbling block, for US presidents and their administrations as they seek to find a way to deal with the Cuban government.

After the political disaster of the Bay of Pigs invasion, American presidents, senators, and congressmen nationwide have treated Cuba, and its people, with great caution.

Now once again the American political structure led by a Democratic President who lost dramatically in South Florida is faced with the question what to do with Cuba.

Biden, whose typical approach to problems like this is to talk, talk, and talk some more. However, as the Cuban people take to the streets in various cities in their country, and political pressure increases from Cuban Americans not only in South Florida but nationwide, Biden and his democratic colleagues must come up with a workable solution to the problem.

Cuban President Miguel Díaz-Canel is already blaming the protests on the U.S. embargo and a social media campaign against the Cuban government.

The last time Cubans took to the streets to protest against the communist government was in 1994, and Fidel Castro was alive.

As you're considering what's going on in Cuba, it's important that you get your information from a wide variety of sources.

Below are three links to various news sites and news organizations that will help broaden your perspective on the issues and the situation that is currently occurring on Cuban soil and in South Florida.

Miami Hearld BY MONIQUE O. MADAN: ‘Prayer is our only armor’: Cuba protests calling on U.S. intervention continue in Miami.

President Biden finds himself on a bit of a slippery slope as he attempts to figure out how to deal with the current Cuban crisis. Already bearing the moniker of a President heading in a socialist direction, the level of trust that the Cuban people have for our President is not particularly high.

With politicians like senators, Rubio and Scott, calling for the Trump era imposed Cuban sanctions to remain in place, Biden is faced with the choice of continuing the embargo and putting growing pressure on the Cuban people while the Cuban regime seemingly bears little of the physical impact of those embargoes.

As political unrest grows in the streets in Cuba and South Florida. What will Biden do?

Biden’s options are limited and there is further stress given the high possibility of a sudden and mass exodus from Cuba to the borders of southern Florida.

The next most obvious question is. How will Joe Biden, and his administration treat those immigrants and the people in South Florida who will support them?

Overt efforts to create a regime change don't seem to be in the Biden playbook.

The current Cuban regime, while not totally isolated from the impacts of the embargo will become more and more concerned about protests in the street and the likelihood for over reaction to those demonstrations must be considered imminent.

There is a real danger, that Biden’s inability to come up with a solution to the current Cuban crisis or at least, something to mitigate it could result in the United States being backed into an extremely uncomfortable corner.