Critical Race Theory - You Need to Get Up to Date 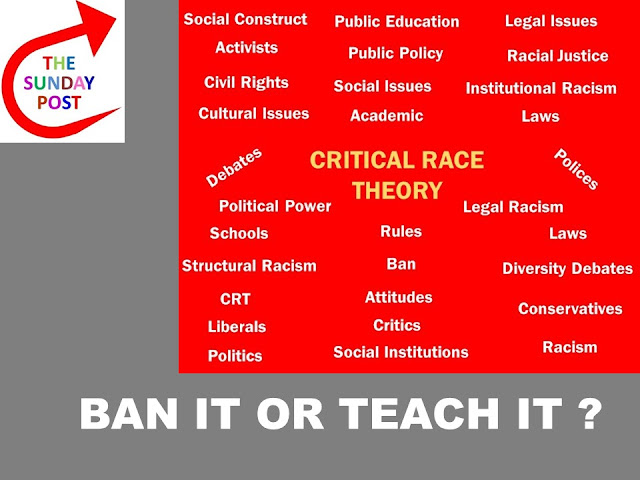 Before you even begin to get into a discussion about Critical Race Theory, you need to arm yourself with some information.

Here are a couple of good references:

Definition: from Britanica: critical race theory (CRT), intellectual movement and loosely organized framework of legal analysis based on the premise that race is not a natural, biologically grounded feature of physically distinct subgroups of human beings but a socially constructed (culturally invented) category that is used to oppress and exploit people of colour. Critical race theorists hold that the law and legal institutions in the United States are inherently racist insofar as they function to create and maintain social, economic, and political inequalities between whites and nonwhites, especially African Americans.

By Stephen Sawchuk — May 18, 2021 What Is Critical Race Theory, and Why Is It Under Attack? Is “critical race theory” a way of understanding how American racism has shaped public policy, or a divisive discourse that pits people of color against white people? Liberals and conservatives are in sharp disagreement.

“Today, those same patterns of discrimination live on through facially race-blind policies, like single-family zoning that prevents the building of affordable housing in advantaged, majority-white neighborhoods and, thus, stymies racial desegregation efforts.”

In Florida Governor Ron DeSantis and the Florida State Board of Education have banned critical race theory, from Florida Classrooms.

From Course Hero, Purposes and Origins of Government

“There are four major theories of how government originates: evolutionary, force, divine right, and social contract.

Evolutionary theory, government originates from a family or clan-bound structure, which can explain the formation of the world's first political structures.

Force theory is the idea that government originates from taking control of the state by force and is often found in a dictatorship...

Divine right theory, government originates with power vested in an individual by God or gods. Generally, monarchs lead governments of this type.

Social contract theory of government was the result of centuries of frustration with the unchecked power of monarchs. Under this theory, government is a kind of contract in which those in power have responsibility toward those they govern and the governed respect the power of the governing individuals.”

Critical race theory had its early origins in the 1970s as an academic endeavor attempting to formulate a theory and prove how the development of institutionalized racism in American culture and government has arisen.

It's been a 50-year effort, both academically and socially, to put structure to the development of race and racism in our society and our governmental structure as it exists today.

There is no real arguing about the existence of racism in our society. And there is also no ignoring the impact it has had and continues to have on people of color in our society.

The question is becoming, as critical race theory is being demonized for political purposes, what position should the results of this 50-year effort take as the American people analyze how we see racism in our society and see its effects?

The knee-jerk reaction of politicians, preachers, and people in general when confronted with something they do not understand or find threatening, is to either ignore it or ban it.

The decision by Governor Ron DeSantis and the Florida Board of Education to issue a ban on the teaching of critical race theory in Florida schools is typical of the political approach that uses this type of academic study and its results to appeal to a segment of the population for votes.

A much better approach would have been for the governor and the leader of the Florida Board of Education to establish a blue-ribbon panel empowered with the determination of how to present this material to the students in Florida’s educational institutions.

Now that decision may well be left to the United States Supreme Court.

If you find all this scary, threatening, and inappropriate as it regards the education of your children think about this: our society is ever changing; our cultural mix is gradually morphing into something other than the puritan white pilgrims who landed on our shores hundreds and hundreds of years ago.

What do our children really need to know about that past? And what about that past do they need to take into the future to avoid some of the very things that have created the situation that now exists?