Who Should Run the Tampa Police Department? 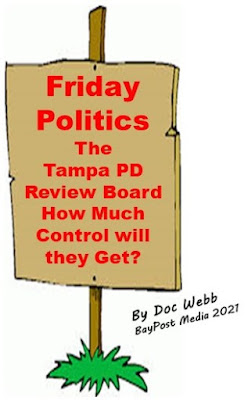 From the beginning, the concept of civilian police review boards has been controversial. There are a number of reasons, but the first thing you have to understand is the law enforcement concept that is widely in place in US domestic police forces.

The concept is, that of a paramilitary organization, with a command structure that controls every aspect of the policing agency's operations.

Generally, law enforcement agencies expect little outside guidance from their jurisdiction on functional operations. The prime responsibility of the city, county or state that the law enforcement organization serves is providing funding and budgetary assistance.

So, the proposal and consideration of an outside agency such as a police review board are generally extremely repugnant to a well-entrenched law enforcement agency.

Compared to the number of policing organizations in the United States the number of citizen review boards or civilian police review committees is relatively small.

For some background information check out these two articles from the Tampa Bay Times:

If you're unfamiliar with the police citizen's review board concept, here is an explanation of some of the typical models for civilian oversight review boards provided by the Scholars Strategy Network.

Currently, nearly 150 oversight boards or civilian–police oversight agencies operating in the United States are primarily associated with large municipal police agencies. Although these institutions differ in size, responsibilities, and other ways, they follow three primary models:

Investigator-focused models enlist non-police civilian investigators to look into complaints against officers. These agencies tend to have individuals with specialized training.

Review-focused models oversee internal affairs investigations and make recommendations about operations to police. These review boards tend to be staffed by volunteers and community members – an approach that can make the board seem more responsive to the community.

Auditing model agencies fall in between the first two models and focus attention on broad patterns of officer misconduct rather than individual incidents.

As civil rights activists push for more city control of the police review process in Tampa, the current effort to give City Council, more control may seem like a good idea at the outset, but this group is also pushing toward a more aggressive model wishing to hire its own attorney, have subpoena power instated and become a truly investigative arm of the city government and the Tampa Police Department with limited control from the general public.

I think this is a bad idea.

Going back to the concept that police departments are almost universally paramilitary in structure, the real question that the City Council and the public in general in Tampa need to ask themselves is when a police officer is making a decision on the spot who do they want that police officer to be most concerned about?

The individuals involved in the incident at hand, the City Council, the Council Member whose district they may be operating in, or the very strong possibility that regardless of what decision they make they're going to have to justify it through a legal process with the city's Police Review Board.

Having subpoena power, and their own attorney the Tampa Police Review Board will quickly grow to a huge bureaucracy of lawyers, paralegals, investigators, clerical, oversight management, and the list goes on.

It's time for the Tampa City Council to take a slight step back and think about what they're doing.

It may make sense to some degree, when it comes to getting votes, but I think the original mix of appointees from the mayor, and the council is a good one, and I'm not really sure why the NAACP has a place at the table at all.

Especially given Tampa’s significant diversity. I can tick off a list of ethnic and diverse groups that I am sure would like to have a seat at the Review Board’s table.