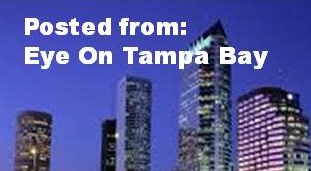 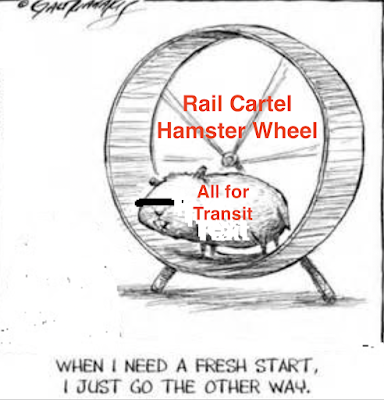 Blind to their past failures, the All for Transit rail cartel's hamster wheel starts spinning the other way to put another $16 Billion rail tax boondoggle on the 2022 ballot. All for Transit's chief cheerleader and spinmeister the Tampa Bay Times jumped into their assigned role. They published this "Whopper" about a recent transit survey.

The Times Whopper is so full of spin and nonsense, it reads like the Onion or the Babylon Bee. We will break down the nonsense.

The Times starts with what we already know:  "Three-quarters of the residents in Hillsborough County wouldn’t use mass transit to commute to work even if it were conveniently available, according to a recent survey." The Eye proved right again!

For those in Loma Linda, three-quarters or 75% is a super super majority of people who will never use transit.

Then the Times reports 15% of those surveyed said they would "consider" using transit...which means they may or may not ever use transit.

For those in Loma Linda, 9% or even the dishonest 24% is a super super minority of people who "may" use transit.

The survey confirms very few want or will use transit. As Commissioner White correctly points out, people want their roads fixed first.

The Times obfuscates the reality very few are for transit by claiming "it means nearly one in four people in unincorporated Hillsborough uses or would use transit if it were more readily available". That is false. "Would" and "consider" are two different words with two different meanings. The Times uses them as synonyms to coverup the actual dismal support for transit.

The Times elevates this single survey of 1300 Hillsborough County residents with a margin of error of 2.7 claiming "The results already are shaping public debate over how to spend the proceeds of a proposed transportation referendum if voters authorize the penny-on-the-dollar sales tax in 2022."

The Times does not honestly call the transit tax what it is, a ONE PERCENT tax. No one speaks in "penny-on-the-dollar" terms except those who want to downplay how massive the tax actually is. It was an All for Transit ONE PERCENT transit tax that unlawfully collected over a Half a Billion dollars in 2 years.

There has been no vote by county commissioners to put All for Transit 2.0 rail tax on the 2022 ballot but according to the Times another referendum is a done deal.....before any pubic input, any public meetings or any public discussion by the commissioners.

Sound familiar? This is exactly how the scandalous and crony Go Hillsborough 2016 rail tax boondoggle effort began. Start with the answer and then force it on the public.

The Times reports Hillsborough County Commissioner Pat Kemp thinks a super super minority of people who "may" use transit shows "strong support" for transit. What??

The transit survey is not "shaping" Hillsborough County Commissioner Gwen Myers. According to the Times, Myers championing All for Transit 2.0 rail tax for 2022, has already made up her mind. She wants the same onerous spending allocations All for Transit dictated in their 2018 illegal rail tax. According to her campaign filings with the Supervisor of Elections, All for Transit's largest donor Jeff Vinik donated at least $6000 to Myers campaign last year.

It is bad governance to just rubber stamp the deceptive All for Transit for a round two in 2022. That smells of "Go Hillsborough" round two shenanigans, this time with County Center "insiders" colluding with All for Transit special interests cronies to deceive the public again.

As Chief cheerleader and spinmeister for All for Transit, the Times went to All for Transit spokesperson Christina Barker for a comment about the survey. Barker works directly for the Times financial benefactor Jeff Vinik and helped author the unlawful All for Transit tax. Vinik "conveniently" hired Barker, who has a degree in political campaigning, 2 weeks before All for Transit petition drive began in 2018.

Barker, who we can assume also speaks for Vinik, is "all in" for spending billions of taxpayer dollars for a super super super minority who "may" use transit. No surprise because by design, All For Transit is very flawed. It forces taxpayers in unincorporated Hillsborough to fund rail in downtown Tampa that greatly benefits Vinik, and leaves the 98% of those who use roads everyday high and dry of funding needed for new roads.

All for Transit spent over $4 million deceptively selling their rail tax was to fix roads. Now the Times reports Barker claims voters in 2018 wanted more transit. But the transit survey she's asked about where a super super majority reject transit debunks  her claim. Barker confirms why All for Transit refused to ever debate their opponent NoTaxForTracks in 2018. Basic math and telling the truth is foreign to them.

It is unseemly the Times only seeks comments from All for Transit, the people who VIOLATED State law and put an ILLEGAL transit tax on the ballot. All for Transit who has shown no remorse for their violation of public trust and malfeasance causing over Half a Billion dollars to be unlawfully collected from taxpayers, gets their say with the Times.

It is disgraceful the Times intentionally ignores NoTaxForTracks who CORRECTLY warned voters in 2018 All for Transit had legal issues. NoTaxForTracks knew then what this transit survey reveals - few want to pay for more transit - because a super super super super majority of people will never use transit. Those who are proven right get no say with the biased Times.

When NoTaxForTracks told the Times in 2018 - in writing - that All for Transit had potential legal issues, the Times refused to report about them. But the Times will publish such questionable nonsense from Kemp and Barker.

But the Times is incapable of providing any sense of fair or balanced reporting about transit, All for Transit or those associated with them.

And their latest Whopper is so embarrassing, it belongs on the cartoon pages.

Posted by Sharon Calvert at 3:23 PM