The AFT Cabal Have No Shame: They Took Your Money Unlawfully, Want to Keep As Much Of The Illegal Tax Monies As Possible and Start Taking More 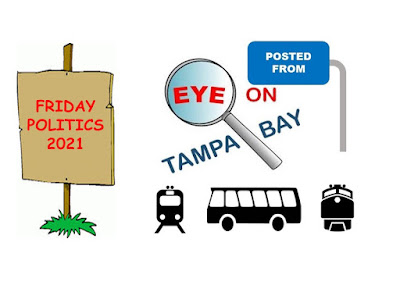 The All For Transportation (AFT) cabal is a political clique of wealthy special interests, influential power brokers, political insiders, unethical bureaucrats, "friendly" media, and transit activists, who privately schemed to deceive voters in 2018. After losing the AFT lawsuit, the cabal is now scheming to try to keep as much of the illegally collected AFT tax monies as possible...as they push AFT 2.0 for 2022.

Recently leaders of Fix Our Roads First (FORF) held a "We Want Our Money Back" Press Conference demanding the over half a BILLION dollars of unlawful and unconstitutional AFT tax monies be equitably refunded to the people either thru a sales tax holiday or a direct check. FORF does not believe AFT or any of the Defendants who lost the AFT lawsuit should be driving the refund process. FORF believes the County can fund its transportation needs without massive 30 year sales tax hikes and Hillsborough County must focus first on fixing and improving our roads, the county's largest and most broadest used assets.

Commissioner Stacy White, who championed the legal challenge that got AFT overturned by the Florida Supreme Court, joined FORF to also comment on the issue. White clearly stated the unlawful AFT tax monies are not the County's money and must be returned to the people. White stated the court filing made by outside hired lawyers that forces people to submit receipts for over 2 years to a 3 judge panel is "funny business" to enable the County to keep as much of the unlawful tax dollars as possible. White also emphasized we "cannot reward bad behavior".

The Eye's video of the Press Conference can be found here.

As a reminder, AFT, funded by wealthy special interests, is a Tampa centric 30 year ONE PERCENT (not one cent) $16 Billion rail tax that included no dedicated funding for needed new road capacity. AFT deceived voters their transit tax would fix roads and reduce congestion. Then County Administrator Mike Merrill admitted in 2018 congestion would get worse with AFT's massive tax hike spending plan that dictated $7 Billion be spent on Tampa rail and transit and nothing on new road capacity.

Now AFT has pushed the "Tampa Centric 5" county commissioners to put AFT 2.0 on the ballot before one cent of the illegal transit tax has been refunded.

Local media attended the FORF Press Conference, they covered it and provided some reporting. But they also immediately sought comments from the lawsuit losers - AFT and other losers. In 2018 the media did not provide such equal opportunities to comment from those who warned about AFT's legal issues. Such equal opportunity reporting could have changed the outcome and caused voters to reject the AFT transit tax avoiding the costly legal mess AFT created.

Vinik and his downtown development, already given $100 million of county and city subsidies and other tax breaks, would greatly benefit from the AFT tax that funded rail in Tampa paid for by taxpayers in unincorporated Hillsborough. The Times became AFT's biggest cheerleader in 2018 and they shut out voices of those who warned about AFT's legal issues and opposed AFT. The Times refused to report even when Commissioner White warned about AFT's legal issues.

As the AFT cabal pushes AFT 2.0, best to remember that honest reporting or even balanced reporting about AFT and anyone associated with AFT will never come from the Tampa Bay Times.

The winning side of the AFT lawsuit should drive deciding how to refund the unlawfully collected $512 million not the losers. Those who lose do not get to choose the refund process.

The AFT cabal should be apologizing for their malfeasance and violation of public trust. Instead the AFT cabal wants a sham refund process that benefits them and enables the County to keep as much of the unlawfully collected tax as possible.

AFT lawsuit losers Hillsborough County, Tampa, HART and Clerk of the Court, filed a motion with District Court Judge Rex Barbas requesting a dubious refund process. The questionable process requires people to submit receipts for any refund of the tax unlawfully taken from them. The AFT losers know most people did not keep receipts for all the illegal taxes they paid for over 2 years. They want the County to keep all remaining illegal taxes not claimed with receipts.

Barbas is the same judge who made a "friendly" lower court ruling in 2019 allowing the County to keep the AFT tax money while throwing out the regulatory spending and oversight committee. Barbas lower court ruling, favorable to the County, was obliterated and totally overturned by the Florida Supreme Court. There are valid concerns that Barbas should not be deciding a refund process being pushed from the AFT losers.

In their court filing the AFT losers call themselves "Recipient Governments" indicating they believe they own and control the illegal AFT tax dollars. Their sham refund process does not require sending any refund notices directly to the households, residents and businesses in Hillsborough County. They only request a "notice to claimants" be published in a "newspaper of general circulation in Hillsborough County" (probably their media ally the Vinik bailed out Times) and notices posted on their websites and on their social media accounts, e.g. Twitter, Facebook, Nextdoor.

AFT supports the "funny business" refund process which could have actually been driven by AFT and their lawyers. AFT wants the County to keep as much of the illegal tax dollars as possible to spend how AFT dictates. They claimed in 2018 that tourists would pay 20-25% of the tax, which is $100-$128 Million of the $512 Million unlawfully collected. AFT knows tourists will not be requesting refunds. They too are banking on most people not having receipts, many people never even knowing about the refund process and many others never submitting anything in the short time period required.

Such dubious process requested by the AFT losers could cause more legal action as the AFT class action lawsuit has been refiled in Leon County.

Commissioner Kimberly Overman, a transit activist and Tampa centric commissioner who supported the unlawful AFT transit tax, was sought out by media after the press conference. Overman, a member of the AFT cabal, was caught lying to media in 2018 which she stated AFT had been "closely vetted" but could provide no evidence to back up her claim.

This go round with media, Overman tried to compare the AFT losers shady refund process to a program where the county pays rent for someone needing financial help. Overman oddly stated: "When we make rental payments for people that can’t pay their rent, they submit a great deal to prove that they have to pay their rent,” Overman said. “I don’t know why this would be any different.”

Overman became a deer in the headlights when she got directly challenged. While speaking with media, Overman was directly confronted, as reported here, by one of her constituents who wants their money back but has not saved her receipts for 2 years.

Overman had no answer.

A county commissioner who cannot answer basic questions about her own policies is in the wrong job. Overman is running for re-election next year.

With the AFT cabal, the end justifies the means.

AFT put an illegal transit tax on the ballot, lied about it, created a costly legal mess and have no remorse about it. If the AFT cabal wants to shaft most taxpayers who have no receipts to recover the illegal tax they paid, so be it.

The AFT cabal thinks the AFT taxes illegally collected are their money anyway....not yours.

The AFT cabal have no shame.

Posted by Sharon Calvert at 9:40 AM