No one will miss TBARTA, even their own members. 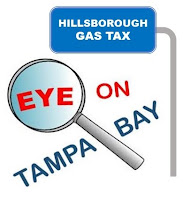 According to his veto list, Governor DeSantis veto'd the $1.5 million TBARTA funding appropriation.

On May 10, leaders of No Tax For Tracks, Save Our Streets Pinellas, and Fix Our Roads First sent a request to Gov DeSantis asking he Veto the TBARTA "Life Support" funding.

These leaders, who have been engaged in the transportation issue in Tampa Bay for many years, cheer the Governor's veto action. They appreciate DeSantis doing the right thing for taxpayers.

Barb Haselden, a leader with Save Our Streets Pinellas and No Tax For Tracks Pinellas, applauded DeSantis's veto:

This is a victory for the taxpayers! Cutting off funding to TBARTA sends a clear message to special interests that transit boondoggles will not be tolerated, subsidized or encouraged by the DeSantis administration and dismissed as unnecessary.

TBARTA, was created by the state legislature in 2007 as a regional "transportation" agency (Tampa Bay Area Regional Transportation Agency) at the request of special interests lobbyist Tampa Bay Partnership (the Partnership). The Partnership basically ran TBARTA as if TBARTA reported to them.

TBARTA was not provided a long term funding source when created. The intent was to later give TBARTA regional taxing authority. The 2008 recession hit and the state legislature had no appetite to create another taxing authority. They backed off ever taking such action leaving TBARTA asking begging for state and county funding each year.

TBARTA has no accomplishments but it does have a questionable and crony history with the Tampa Bay Partnership, the biggest pushers of rail tax boondoggles in Tampa Bay.

After Jeff Vinik joined Tampa Bay Partnership, the Partnership demanded TBARTA focus only on costly rail and transit. Vinik funded the 2018 illegal All for Transportation rail tax. The Partnership wrote the bill to change TBARTA's name to Tampa Bay Area Regional Transit Agency, handed their bill to then Senator Latvala who championed rammed it through the state legislature in 2017.

What a fiscal disaster that transit boondoggle would be. Transit ridership is worse than anemic in Tampa Bay and as we previously posted we should not be dumping more taxpayer dollars into failing transit agencies.

Karen Jaroch, a leader with No Tax For Tracks and Fix Our Roads First also commended DeSantis:

TBARTA is a transit agency that has provided zero transit service in its 14 year existence and wasted millions of dollars. TBARTA is so irrelevant, its own board members do not bother to show up for monthly board meetings. It's time to shutter TBARTA and Gov DeSantis's veto is a good first step.

Senator Brandes had a bill to eliminate TBARTA that did not get thru this session.

Eliminating TBARTA will not only stop its wasteful spending, it eliminates the possibility of TBARTA ever becoming a regional taxing authority.

The leaders of No Tax For Tracks, Save Our Streets Pinellas and Fix Our Roads First are already looking ahead for another "victory for taxpayers". They want a bill passed next session that eliminates TBARTA once and for all.

No one will miss TBARTA, even their own members.