Biden, Trump and Putin - Where Are We Going? 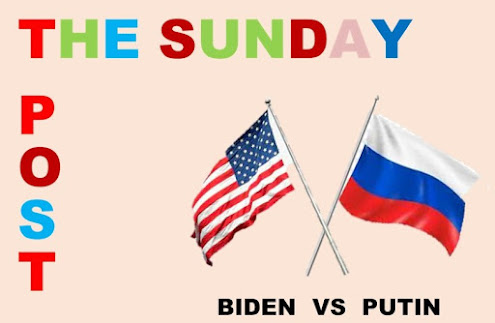 I watched the summit meeting with President Biden and Russian President Vladimir Putin with great interest this past week.

However, what I found most interesting, was an interview by Keir Simmons of NBC News with the Russian President.

From the full transcript of the interview with Russian President Vladimir Putin by Keir Simmons of NBC News, which took place in Moscow on June 11, 2021, here is the excerpt I found most interesting.

VLADIMIR PUTIN: Well even now, I believe that former US president Mr. Trump is an extraordinary individual talented individual, otherwise he would not have become US President. He is a colorful individual. You may like him or not. And, but he didn't come from the U.S. establishment.

He had not been part of big-time politics before, and some like it some don’t like it but that is a fact. President Biden, of course, is radically different from Trump because President Biden is a career man. He has spent virtually his entire adulthood in politics.

He has been doing it for a great deal of years and I have already said that and that is an obvious fact. Just think of the number of years he spent in the Senate, and how many years he was involved in the matters of international politics and disarmament, virtually at the expert level.

You can read the full interview here: Full transcript of the interview with Russian President Vladimir Putin by Keir Simmons of NBC News, which took place in Moscow on June 11, 2021.

I had always thought that a big part of the Russian president’s general restraint during the Trump administration, had more to do with Donald Trump's unpredictability than it did with his statesmanship.

Reading the above transcript from the Simmons interview, Putin seems to validate this observation by drawing the distinct difference between the two US presidents regarding Trump's political experience and Biden's long-term political indoctrination.

During the Trump administration, Putin seemed unwilling to take major risks either militarily or economically, and I think the real reason may have been that he was deeply uncertain of how Trump might react.

On the other hand, President Biden, has a long track record of actions and reactions to both political and geopolitical events.

In the case of Trump, the possibility of a somewhat unpredictable but violent reaction to some course of action taken by Russia was much more likely than a similar course of action from now President Biden.

By his nature, Biden is a negotiator, a compromiser, and one who searches long and hard for options that involve negotiations and discussions and not overt actions.

I think this is the most revealing part of the most-recent interactions between President Biden and Russian President Putin.

Putin is much more likely to test Biden in the crucible of world events then he was with President Trump.

The question simply is, how will Biden react?

In today's world, if Russia decides to take some military aggression in anyone of the several world hotspots and Biden’s approach is to use the UN, asked to sit down and negotiate, or look for common ground; Russia will likely proceed with whatever action they may take for as long as they can string out the negotiations.

That's how Putin sees it, and I think that puts us all in grave danger.