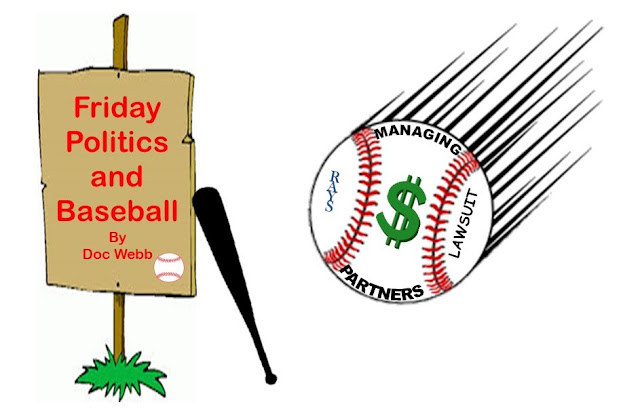 What started out as a spat between managing partners of the Tampa Bay Rays, Stu Sternberg, and several of his minority business partners appears to be slowly headed toward open warfare.

For some background information, check out these articles from the Tampa Bay Times.

Tampa Bay Times By John Romano: If Rays are forced to open their books, lawsuit could be a good thing.

Quoting from the Tampa Bay Times articles,” It (the lawsuit) was filed by Robert Kleinert, Gary Markel, Stephen M. Waters and a trust bearing his name, and the MacDougald Family Limited Partnership, LLLP. Collectively, they own just under 9.6 percent of the team, according to the lawsuit.”

Unless Sternberg can put enough money on the table quickly to make this problem go away, things could get very interesting.

Checking out the basic information that the Times has uncovered so far, a number of questions are starting to arise regarding not only about Sternberg and his business practices with the Rays ball club, but also the possibility of a violation of the Use Agreement with the City of St. Petersburg regarding Tropicana Field.

As most situations like this, the devil is more than likely in the details. The question is how long the Rays can afford to let this lawsuit go before it starts digging into things that they probably do not want to be exposed.

All of this comes at an interesting time. First, the team is looking more and more like they may be a World Series contender again. All this hassle about the business operation really doesn't help the morale or the momentum of the team itself.

Secondly, as mayor Rick Kriseman struggles frantically to get some sort of a redevelopment deal at least started if not well underway for the Tropicana Field site before his impending departure as mayor of Saint Pete, those efforts have been completely derailed by the accusations against Sternberg and his dealing with the minority partners and transfer of team ownership.

All of this is especially troubling for Mayor Rick Kriseman, as he term limits out, and has expressed some ongoing political interests. Potentially he is considering a run for the congressional seat of gubernatorial candidate Charlie Crist.

This is probably not the time Kriseman wants to get himself embroiled in what could be a nasty and ugly squabble between Sternberg his management team and this group of minority investors.

Now there will be more people than ever pawing around in the records and the details and probably doing some public records requests to see what if anything anybody at the City might have known about some of the activities and looking for more information about these minority partners and what they do.

So, in less the Rays managed to lose a playoff, it looks like there're going to be two games on the field from now through the end of the baseball season, and one will probably last much longer than that.

There is the hunt for that elusive World Series championship, and what appears to be an ongoing legal battle for the future of the team as a business.

For now, it appears his minority ownership group has pitched him a high an inside fastball. Sternberg will more than likely not take a swing at it since it will be called a ball, and he will still have three strikes left.

This whole mess has all the characteristics of an absolutely fantastic social media blitz for everyone involved. That would include the Rays baseball team, Stu Sternberg, some of his inside the circle advisors, the managing partners, along with the city and the mayor himself.

Hang on, this is just the top of the first.