Millennials, God and the Church 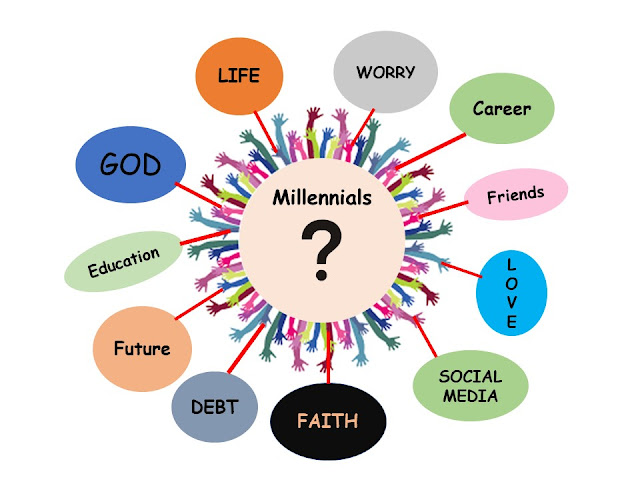 Millennials are leaving the church and there is an enormous amount of research trying to figure out why.

Take a look at this article From FiveThirtyEight By Daniel Cox and Amelia Thomson-DeVeaux: Millennials Are Leaving Religion And Not Coming Back.

Below, is a research study from the Pew Research Center: Religious Landscape Study. Click on this link and you can do a deep dive into the data they have collected on millennials and their faith.

The traditional circle of life in the Christian Church has been for years: people marry; they have children; they bring their children to church, as the children move into their mid and early teens, there is a stage of rebelliousness, they go on to college; they marry, and start a family and then there begins somewhere in the latter stages of that process a slow drift back to the church.

It's not working that way anymore.

The Table above, deals with younger millennials and their belief in God, and I think it's representative. However, the leading edge of the millennials has not followed the traditional circle of Christian life. As they began their families, they have not necessarily returned to their religious roots.

Universally, church attendance has been on a steady decline for the last decade. In the last few years on an annualized basis, more churches close than open.

The millennials, who are in many ways an offshoot of the me-too generation, seem to have great difficulty reconciling themselves to the concept of an ultimate creator and a savior in the form of Jesus Christ.

I don't think anyone has figured that out yet, but as Protestant denominations continue to shrink, and faith as a guiding principle in our society becomes less important, the impact of the move away from religious thought is becoming more and more apparent.

A lot of these millennials were pulled out of the traditional public school system, isolated from society, educated in private schools, often church based, and in many cases were exposed to the Bible and Christian faith throughout their formative educational years.

These millennials were also the first group of children to be raised with the concept of everybody gets an equal chance, everybody gets a trophy, there sincerely are no consequences for your actions and striving for perfection or success is not all that important.

The results of the millennial educational process first appeared when many high school graduating millennials decided that Career Education was not really the important thing, but self-enrichment education would serve their needs.

In the ultimate end, their parents did not encourage them otherwise and these millennials are the ones who ended up living in the basement until they are in their late 20s or early 30s writing poetry, music and running from one “social cause” to another while disdaining becoming a productive member of society.

It is not just the Church. Recruiters in all types of business, education, and government deal with the issue of the millennials every day.

Religious faith was one of the main principles our country was founded upon and has been the bedrock of everything from our Constitution to the precepts that govern our actions in society.

The question becomes as faith and religious thought and practice grow dimmer in our society what will our country look like?

It's not just about the church it's about all that we are.