What Is The Lesson Learned From The Piney Point Near Disaster? 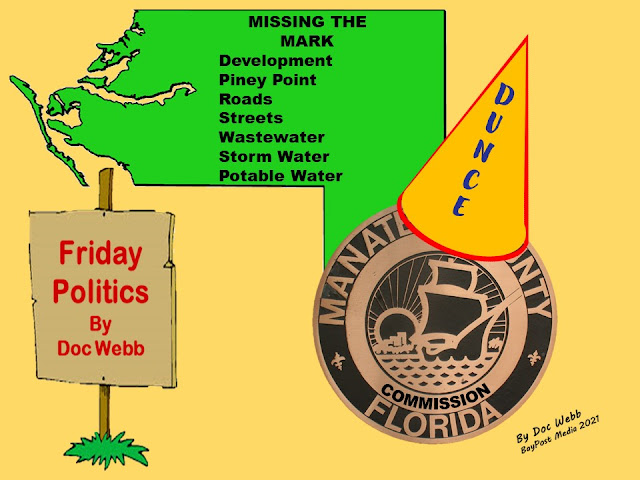 It would be easy to go back to the very beginning of the Piney Point problem and blame the phosphate fertilizer business for the mess Manatee County now finds itself in.

For a complete timeline on Piney point check out this article from the Tampa Bay Times by Christopher O'Donnell: Piney Point from 1966-present: On the edge of disaster.

It has often been said that the government that affects us most directly, is our local government. More specifically, the City or County where you live that makes and enforces the rules.

Such is the case here in Manatee County. For decades, Manatee County has been led by a bunch of bumbling inept politicians more interested in courting dollars and avoiding risks than they are in protecting and serving the public that they serve.

Here are some thoughts from the Tampa Bay Tines: Florida reminded again that someone always pays for pollution | Editorial.

I thought Dr. Hopes did an outstanding job working with the media, reassuring residents living nearby Piney Point and keeping them informed as to what was going on. I firmly believe his still, calm voice in the midst of all of this prevented the physical disaster from morphing into a media circus.

If you would like some additional information on Dr. Hopes, check out his bio Manatee County Administrator.

The problem is Piney Point is just another symptom of how poorly Manatee County has been managed for a couple of decades.

For some unknown reason, it seems like those who migrated to the Manatee County Commission could never quite come to grips with the fact that Manatee County is as robust and rich a County as are Pinellas and Hillsborough.

One of my early mentors had an exceptionally good pet phrase, “Take advantage of your advantages.”

The advantages' Manatee County had, were squandered in poor planning, risk aversion, political inbreeding, and a failure to bring in capable management at all levels as the County began to rapidly grow and expand.

The Manatee County Commission has literally missed the mark on everything from early planning and development to infrastructure management.

For years, it has been closed-minded thinking and risk avoidance, and once the big developers moved in and began to take over; Manatee County began to suffer from outside political influence.

When a County administrator panics during a housing crisis and stops all infrastructure planning and construction in the eastern half of a County soon to explode with development, problems occur.

When a County administration is fully aware of a situation like Piney Point and passes the ball to State agencies problems are sure to occur.

When a County Commission takes 12 years to build a swimming pool in a mostly minority community, it is no wonder problems exist.

I do not think that the Manatee County Commission or the Manatee County administration has any concept of the level of problems that they are going to face regarding roads, wastewater, potable water, and public safety going forward.

Where will the money come from?

But more importantly where will the courage come from?

Certainly not from the crowd that's running things now.