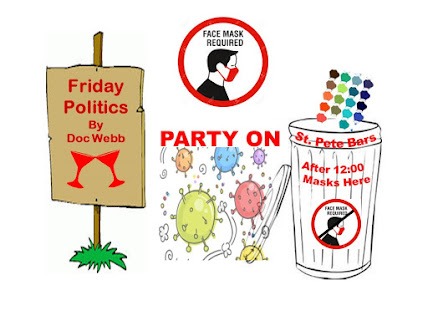 For some insight check out this FOX 13 News piece by Dan Matics: ‘We are exhausted’: St. Pete bars, restaurants against mayor's two strikes and you’re out proposal.

Mayor Kriseman told Fox News he is asking City Council to change things from fines to pulling the establishment's ability to operate after midnight if a business or bar has two violations.

From the Catalyst article “Council members Foster and Lisa Wheeler-Bowman cast the only two votes for the plan, while Council members Montanari, Blackmon, Gina Driscoll, Darden Rice and Brandi Gabbard voted against it. Council member Deborah Figgs-Sanders was absent.”

How much of a role did politics play?

In addition, the bar business in general is a good friend at campaign time to the politicians who lean their way.

Mayor Kriseman’s plan was loaded with potential legal issues that could have found the city caught up in a continuing stream of legal battles with the bar and hospitality people.

Not a good way to invest your time or resources given everything else that is going on.

You do have to give the Mayor some high marks for stepping into the breach of an argument like this and taking an aggressive stand.

One can only hope that the bar businesses in Saint Pete will get the message and act responsibly.

But then hope rarely springs eternal.