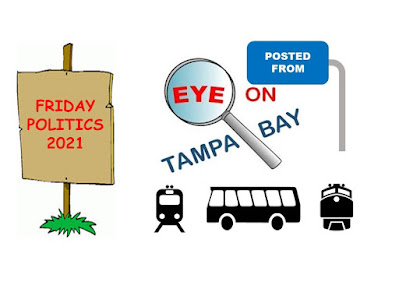 The All for Transportation (AFT) unlawful and egregious 2018 rail tax was thrown out by the Florida Supreme Court.

Sharon Calvert, co-founder of this blog and No Tax For Tracks, was a guest on Saturday's AM860 BrookeTalksAmerica podcast to talk about the illegal AFT transit tax and where to go from here. Take about 15 minutes to listen as Calvert emphasized the paradigm shifts away from traditional transit and costly rail, the need to fix our roads first and stop another wasteful AFT 2.0 rail tax boondoggle.

AFT's 30 year $16 Billion spending plan was not developed by transportation engineers, planners and financial professionals. It was created by transit activists outside Sunshine with no transparency and with no public input.

AFT colluded in the dark in 2018 with influential power players and wealthy special interests who funded their unlawful transit tax hike effort. An astroturfed AFT spent at least $4 million of special interests money deceiving the public their rail tax would reduce congestion and fix roads.

But it was AFT and their crony special interests donor base who created a big, costly mess.

AFT caused $502 million to illegally be taken out of the pockets of taxpayers. Those unlawfully taken dollars must be rebated asap back to the people of Hillsborough County.

Failure, especially an epic failure to abide by state law, should never be rewarded.

AFT cannot be trusted to have the best interests of all residents in Hillsborough County.

AFT has a right to their opinion but that is it. Others with differing opinions and alternative plans and proposals must have the opportunity to provide input in a transparent process.

Debate on the local transportation issue must be in the Sunshine, open, transparent and robust. 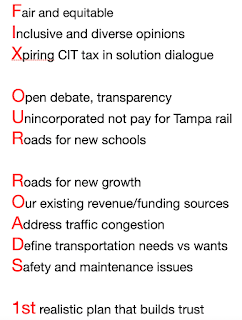 Hillsborough County commissioners must rebuild trust after the damage AFT caused in the county. Watch them very closely.

Six of the Hillsborough County commission seats (all but Pat Kemp's countywide seat) are up for re-election in 2022.

Posted by Sharon Calvert at 8:34 AM