The NRP And the GOP Will There Be A New Republican Party? 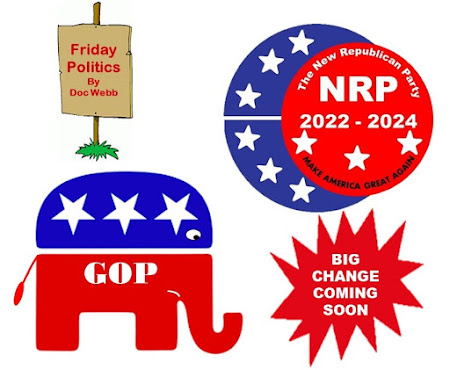 Well, the battle lines are starting to become clearer between the Republican establishment who hates Trump almost as badly as the Democrats do, and the fervent Trump supporters who would like to see him reelected in 2024.

There's also some chatter about The Republican Party splitting into two factions.

The GOP continues to be dominated by a group of old white men most of whom are very wealthy and totally out of touch with the reality of today's cultural shifts. They long for the good old days, for lower taxes, fewer social programs, and more individual responsibility. They are war adverse, isolationists; and genuinely believe that climate change is a bigger business than it is a problem.

Inspired by the four years of the Trump administration, this group of new Republicans will be younger, more diverse, quite possibly a little less better educated, and deeply untrusting of their GOP counterparts.

While there is a lot of old money out there in the GOP, a lot of it is slowly dying off both literally and figuratively. In the meantime, there is a growing amount of very wealthy young and middle-aged Republicans who have begun to feel deeply disenfranchised by the current Republican Party.

As tension continues to grow between former President Donald Trump and Senate Minority Leader Mitch McConnell, the battle for who will be the voice of the GOP will heat up.

Former President Trump, unlikely to wait for the GOP establishment to decide his fate will quite likely move to establish a political party like structure to begin developing funding sources and support for his approach to the 2022 midterms.

Will Donald Trump run for president in 2024? It's hard to say at this point. But it already looks like we will see one Trump on the ballot in 2022, and I would not be too surprised to see at least one more.

The traditional Republican Party has emerged from serious defeats and major disasters before. But they have never suffered such a serious defeat while having the defeated candidate remain so personally and politically popular.

It's always been easy for either political party to quietly dislodge its losing presidential candidate and open the door to new opportunities at the top of the party.

This time it's different Trump is still there, still driving the news cycle, still drawing large donations, and he's not particularly happy with the way the Republican Party is being run.

When Donald Trump finds a structure he doesn't like, he tears it down and builds a new one.

He's done it before, he's probably going to do it again.