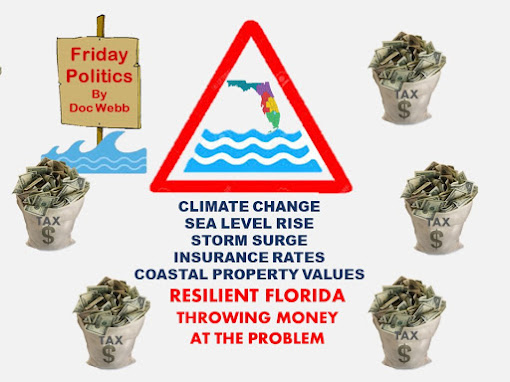 For more information check out these two articles:

The proposed projects could range from preserving land to building seawalls to address the impact of sea level rise on dozens of government structures and services.

In addition, almost $12 million would be used to provide grants to coastal counties, coastal municipalities and inland counties that have not completed vulnerability assessments related to the threat of a sea-level rise.

As much as we might like to think the federal government, and perhaps the state government will bail out all of us who live near the coast, the fact is they cannot and will not.

While the politicians use climate change and sea-level rise to scare people and denigrate their political competition to get votes, they have no big scale solution because there simply isn't one.

Sea-level rise is ultimately a local issue affecting hundreds of Florida communities and millions of people. When the streets began to flood at high tide, and what once was a marsh is now a bay with gradually rising water, when wastewater treatment plants conveniently located next to waterways are inundated the battle will simply be lost.

Here is some additional information:

Sea-Level Rise A Fact, A Political Foot Ball, a Growing Business Part 2
Sea Rise – Where the real battle will be waged? Part 3

The issue with this type of funding approach to the climate-change problem is simply throwing money at this will not produce real results.

Building a seawall around Florida is not a solution.