Battle Royale or Tempest in a Tea Pot - Kriseman, Sternberg, the Rays and the Trop 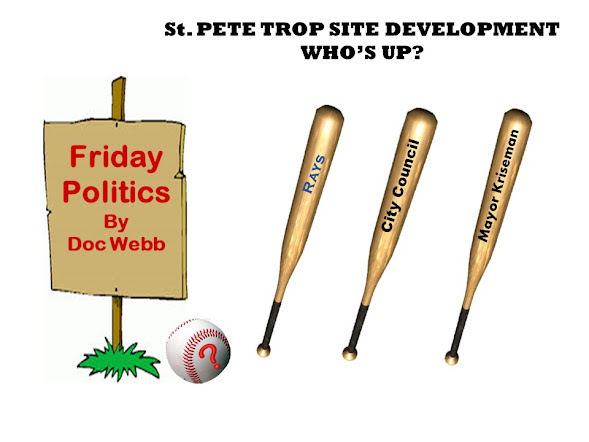 The battle over the redevelopment of Tropicana Field and the surrounding property is just beginning to heat up.

There have been since the start of redevelopment talks an open rift between the Rays and the Kriseman administration almost since the first-day  Rick Kriseman took office.

While the Rays try to keep all their options open, mayor Kriseman is trying to figure out how to get his own personal stamp on the Trop property redevelopment.

City Council finds themselves in a unique position. However, they need to reign in Kriseman and his minions in before the Trop redevelopment gets out of hand like the Pier project did.

In case you are not up to all the recent goings on, below are some links to recent articles in the Tampa Bay Times they are well worth the read.

Just in case your memory needs a little refreshing, here are a couple of posts from 2016 as Mayor Rick Kriseman manipulated the selection of the new pier design.

What resulted was a pier design that most people didn't want and an Upland park that will ultimately be underwater if mayor Kriseman's own climate change predictions come true .

Mayor Kriseman has long had his eye on the Trop property as a potential redevelopment site. But I think it's more about his long-term legacy then it is about the redevelopment.

The contentious relationship with Ray's owner Stu Sternberg has been almost deliberately cultivated by the Kriseman administration. However, to allow Kriseman the opportunity to put his fingerprints all over the redevelopment of the Trop site, regardless of the outcome with the Rays, is something City Council needs to be very careful about allowing.

Kriseman and his team, have an uncanny way of making up the rules as they go along and then bending the rules they make as it serves their purpose.

City Council should be wary of a review of the seven proposals that were submitted by the Kriseman team and any recommendation from them regarding proceeding forward with one of those proposals.

My view of the Trop property is simple.

I think the city and the Mayor, and the City Council should say thanks to the Rays and Sternberg for all they have done for this community and then politely send them on their way.

The Tropicana site would be better off developed as a unique urban center while supporting the continuing redevelopment of Saint Petersburg into one of the finest cities in the southeast.