If You Haven't Already Voted, It May Be Time to Vote Your 401K 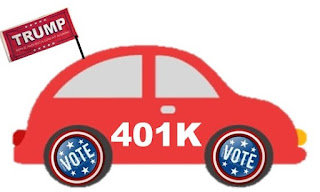 Wednesday the US financial markets took a major hit.

There are a lot of theories about what actually happened here but more than likely the large hedge funds and institutional investors are starting to weigh the great possibility that the Democrats may seize control of both houses of Congress and the presidency.

If you haven't voted by now, either you're just one of those late in person voters and there are a lot of those, or you're still trying to figure out which one of the two presidential candidates you're going to vote for.

You can still go to my blog post Voter Decision Tables and use the decision tables to make your voting decisions, or you could just simply vote your 401K.

If you don't as a rule check your 401K, you probably have an online access account that will allow you to take a look at it, normally those sites have a chart that shows the value of the account overtime.

Take a look at this week's effect on the stock market and you can see a kind of a trend as to what will happen if the Democrats, in fact, take over the federal government.

First, it is important to know that whether it's Trump or Biden, neither will be able to immediately implement the things they are promising.

However, the financial markets evaluate potential risk and while the candidates tend to rely on the Office of Budget and Management to predict the impact of their proposed programs on the economy, the financial industry has its own set of highly sophisticated computer algorithms that they used to predict the short-term and long-term financial future.

I think what you're seeing right now is market volatility based on early projections of a Biden victory.

If you are near retirement say in the next two or three years voting your 401K might not  be a bad idea, especially if all the rest of the stuff that's going on in politics is of little interest to you.

The Democratic proposals for a gradual drift to socialism, government-controlled health care, and increased taxes on those who make more than $400,000 a year; all of these programs will have a negative effect on investment growth, employment and your 401K.

A Trump victory will certainly lead to four more years of the equivalent of a political wrestling match between Trump, Congress, and the media. The interesting thing about that is it doesn't really seem to affect the markets very much. The power players in the financial industry seem to have great confidence in Trump and his ability to manage the economy.

There is absolutely nothing wrong with voting in your own personal financial best interest. A lot of people do.

In any event, be sure you go vote.