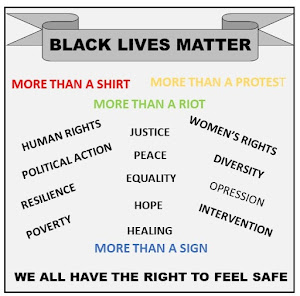 Opinion by: E. Eugene Webb PhD
Author:  In Search of Robin, So You Want to Blog.
You see it everywhere: The Black Lives Matter banner.

It was on the Amazon splash page for a while, it's draped across Walmart stores entrances, Google couldn’t resist. You see it in corporate mission statements. You see it on news media outlets, fast-food restaurants, and bumper stickers.

Are all these people really interested in the objectives of Black Lives Matter or are they just pandering to those who drive the movement in an effort to or make themselves look good, and feel better or curry favor to keep their businesses from being attacked?

There is and always has been racial inequity. It's not just here in the United States it's global, and in fact, discrimination based on racial and ethnic differences literally goes back to the beginning of time.

It's also not just the businesses and corporations that are pandering to the black lives movement, but a number of the less enlightened millennials in our society have grasped on to Black Lives Matter as a way to express their animosity toward what they consider the “system” and also as a way to work out their frustrations by protesting in violence.

So here is what I think is the bottom line. Walmart for all the signs they hang on their buildings is not going to have much impact on how local law enforcement and racism play out on the streets.

Microsoft, Facebook, Google and all the other large corporations that are running around waving the Black Lives Matter flag really have the same problem.

They can make a lot of noise, fan the flames, and encourage the protesters but none of them are going to get down in the trenches and try to fix the endemic problem of racism in law enforcement in the United States.

They all may have a lot of money, but none of them have the courage to standup be counted and cause a change. They haven't so far, and they won't in the future there's just too much to lose.

Tampa Bay Bucs Head Coach Bruce Arians may have it right when he recently said, “Protesting doesn’t do crap, in my opinion. I’ve been seeing it since 1968.” “I don’t know that protest is an action,” and that he would beg players, “To take action, find a cause and either support it financially or do something to change the situation.”

Arians is right. All this noise is just that so much noise and in fact, the black lives matters structure is now; I believe, clearly in danger of doing more harm to their cause than they are doing good.

It's time for the true leaders of Black Lives Matters to step to the forefront condemn those who would burn, loot, do violence and threaten the very fabric of our society and engage those who would willingly go hand in hand with them peacefully to help resolve the horrific racial issues inherent in law enforcement and in other areas of our society.

It's just really difficult for a small businessman or a medium-sized businessperson to legitimately support calls for police reform while he's watching his business being looted in a protest.

As long as that's the approach change is going to be really difficult.