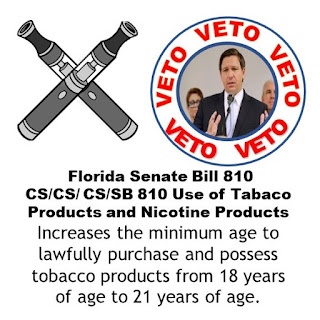 Opinion by: E. Eugene Webb PhD
Author:  In Search of Robin, So You Want to Blog.

In a late Tuesday video message Governor Ron DeSantis called raising the age to 21 to purchase tobacco products in Florida superfluous since it's already mandated by federal law the bill which DeSantis vetoed Senate Bill 810 would have largely brought Florida into compliance with federal laws aimed at curbing teen vaping.

From the Times Article, George Conley, president of the American Vaping Association, said, “The bill would have had a devastating effect on the state’s economy. “When legislators voted for this bill, few had any idea that they were actually voting to shut down small businesses in their districts. This would have been disastrous not only for the 5,000-plus vapor-related jobs in Florida, but for the 800,000-plus adult vapers in Florida as well”

The facts still remain, that when you set something on fire or heat it up to the point where it turns into a smoking vapor and suck it into your lungs not much good is going to come of that.

State Attorney General Ashley Moody and outgoing Senate President Bill Galvano worked tirelessly to develop the Legislation for Senate Bill 810 and shepherd it through both the House and the Senate.

This is just another bad decision by Governor DeSantis who has continued to error on the side of people who make money from issues in contrast to people who suffer health consequences from them.

The deed is done now; the smoke shops are still open, the kids under 21 can get their flavored smoke juice, and the health impact will be measured in damaged lungs and lost lives going forward.

There is unlikely to be a line on the DeSantis scorecard titled number of lives lost due to vaping, but there should be.

Next time you're walking down the street, sitting at the beach or maybe just hanging out in one of your favorite restaurants, and you see a cloud of orange vape smoke floating across the room or the beach or out of a car window you probably have our governor to thank for that.

I used to think DeSantis was a pretty smart guy. As I have mentioned I voted for him for governor. But every day he spends more time worrying about what Donald Trump might think or say and less time thinking about what is good for Floridians and their children.