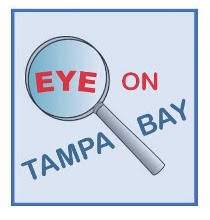 While waiting for the final ruling by the Florida Supreme Court regarding whether the All for Transportation (AFT) rail/transit tax will remain or be thrown out, the coronavirus pandemic hit.

The AFT transit tax forces 45% of the $16 Billion tax to go to the transit agency HART. The only reason $7 Billion must go to HART is to fund costly rail projects. The AFT rail tax was intended to force taxpayers in unincorporated Hillsborough County to pay for numerous rail projects in the city of Tampa. While billions are not needed to improve HART's bus service, they are needed for rail projects targeted for the "choice riders" always found somewhere over the rainbow.

The pandemic has devastated transit ridership everywhere and the "choice rider" in Hillsborough County may no longer exist. People will prefer to continue using the safety and security of their own vehicles not boarding trains with strangers.


We know the epicenter of the pandemic is the NYC metro area which has the densest population in the country. Almost all of the other "hotspot" outbreak areas are in dense urban areas and/or unfortunately outbreaks in nursing home/long term care facilities.

The dense NYC metro area has the largest number of transit riders in the country. This MIT study The Subways Seeded the Massive Coronavirus Epidemic in New York City
demonstrates that "New York City’s multi-pronged subway system was a major disseminator – if not the principal transmission vehicle – of coronavirus infection during the initial takeoff of the massive epidemic that became evident throughout the city during March 2020."

The MIT study suggests "Studies of the role of subways – and public transit generally – in the recent propagation of coronavirus in other major urban centers warrant attention."

The fact that NYC just shut down their entire subway system to finally sanitize the system reflects abject incompetence. Waiting this long to take such action resulted in more spread of the virus, more cases and perhaps more deaths in the NYC metro area.

Los Angeles, the 2nd largest metropolitan area in the country, has fared much better than metro NYC because it is much less dense and there are less transit riders. The Sierra Club transit advocates, with their friendly urban planners, politicos and media allies made the term "sprawl" a four letter word. They increasingly disparaged single family homes and use of our own vehicles to favor the NYC model of stack and pack density and mass transit.

Change the negative term "sprawl" to dispersed. According to this post in the LA  Times by Joel Kotkin, we find that the dispersed model of LA, both dispersed work and living patterns and the use of cars, probably saved many lives in the LA metro area.

Kotkin points out the pandemic is creating paradigm shifts with much greater telecommuting which may permanently reduce the need "for transit systems to serve employment centers" and states:
State policy, urban planners and pundits may decry this trend, but after a pandemic, dispersion may well seem a safer bet than densification.
Hillsborough County, with a population of about 1.4 million dispersed over 1100 square miles, also has numerous dispersed work centers. Hillsborough County has 3.5% of all cases in Florida unlike the epicenter in Florida of Dade, Broward and Palm Beach counties, the densest metro area in the state, that have almost 60% of all cases in Florida. 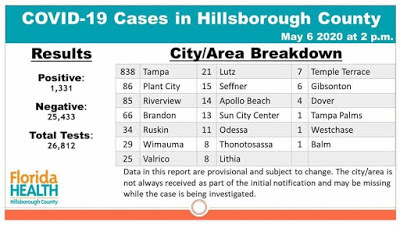 The evidence is clear that densification and transit help spread dangerous germs and viruses.

The Florida Supreme Court could throw out the AFT rail tax in its entirety. That would be an immediate 1% sales tax cut which would bring much needed relief to those now financially struggling. That tax relief would also directly benefit businesses, especially struggling small businesses who lease their work space, because they would see an immediate reduction in their commercial lease tax rate positively helping their bottom line. 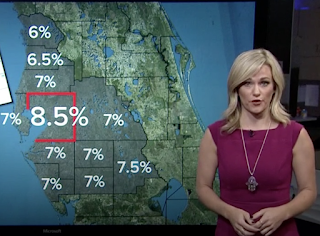 No one predicted this pandemic.

But we will remember those who supported and funded the AFT rail tax in 2018 and created such a big legal mess.

We will remember the four county commissioners (Miller, Murman, White, Hagan) who made the right decision, twice in April, to not pursue putting a $16 Billion AFT 2.0 transit tax on the November ballot.

And we will remember the three county commissioners (Kemp, Overman, Smith), who in the middle of the pandemic shutdown causing tens of thousands of their own constituents to lose their jobs and local businesses to struggle to even survive, persisted in trying to put another $16 Billion AFT 2.0 transit tax on the November ballot.

Christina Barker, an AFT spokesperson who works directly for Jeff Vinik, the largest donor to the AFT campaign, tweeted this in April: 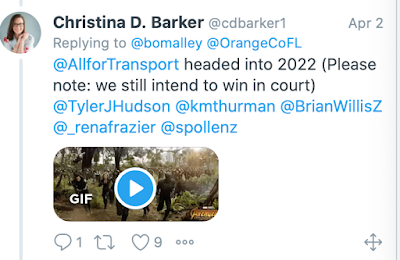 The transit advocates who support stack and pack densities, who funded and supported a legally challenged and unlawful AFT transit tax, are not as concerned about the health risk of transit, the safety of your health or that transit ridership is in the dumpster more than ever.

Because if the AFT transit tax is thrown out, they will be back in 2022.