The Pandemic and Politics 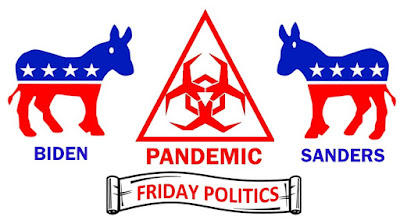 Tampa Bay, Fl
Opinion by:
E. Eugene Webb PhD
Author: In Search of Robin, So You Want to Blog.

As the effects of COVID-19 spread, the effect on the political landscape may be spectacular.
Since viruses as a general rule are political party agnostic, you might think the effects on the Biden and Sanders campaigns are the same. Such is likely not the case.
Biden
In the case of Joe Biden, the Pandemic is a two-edge sword.
On one hand the reduction or elimination of large-scale rallies and spontaneous crowd comments, limits the opportunity for the media long awaited Biden gaff. The media and the Sanders campaign are hanging by their collective fingernails and foaming at the mouth in anticipation of a Biden screw up. The pressure on Joe Biden must be intense.
Then there is the case of momentum. You hear a lot right now about the Biden momentum and how critical it has been in the former Vice President’s recent primary victories.
Momentum tends to be a visual thing. People see other people excited and catch the feeling, not unlike a pandemic, momentum is contagious. Without the crowds, and the big rallies will the Biden momentum continue? Can you maintain momentum with an advertising campaign and through the medium of social media? We will soon find out.
Sanders
Bernie Sanders will also suffer from the lack of energy generated by the large rallies and gatherings. Sanders has the advantage of a following that is energized by social media, and this may well work to his advantage. The recent Sanders advertising campaign showing Bernie standing at a podium rebuking Biden on social security should include more crowd shots show enthusiasm.
While Biden may struggle to keep the momentum going, Sanders is staring to see the real effects of a party seriously considering a strong move to the left and socialism and rejecting it. Sanders has been on point and on message for literally decades, and that is not going to change now.
Sanders could possibly steal the momentum with the announcement of a stunning Vice-Presidential pick, but with the inability to get out on the stump and campaign as a team, it would likely be too little too late.
Sanders is much less likely to make a major political or policy gaff. However, should Biden stumble, Sanders would need to pounce hard. That could be difficult given the friendship that exists between the two.
The final unanswered question is how this pandemic affect voter turnout. Much of the effect of the November vote can be eliminated by mail in and remote voting.
In the short term for the remaining primaries, those who have to go to the polls are a significant unknown.
E-mail Doc at mail to: dr.gwebb@yahoo.com or send me a Facebook (E. Eugene Webb) Friend request. Like or share on Facebook and follow me on TWITTER  @DOC ON THE BAY.
See Doc's Photo Gallery at Bay Post Photos.
Disclosures: