The Anti-Car Brigade: $16B Transit Tax Tied to Tearing Down Interstates and Road Diets

Who knew? All for Transportation is the anti-car brigade who want to force us out of our cars to use public transit.

While All for Transportation (AFT) sold their $16 Billion transit tax as some "plan" to fix and improve roads and reduce congestion, it actually specifically prohibits and limits funding of new road capacity for 30 long years.

We seriously doubt most voters knew about the burdensome regulations because AFT buried them in the fine print and never mentioned them.

We also doubt voters were ever told the AFT transit tax would be used for road diets that will remove major portions of existing road capacity for transit. 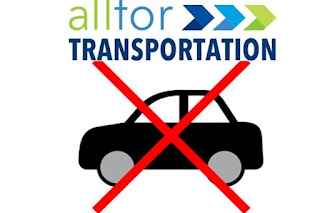 The Hillsborough MPO, apparently taken over by AFT anti-car brigade supporters who live in Tampa, are using tax dollars to study tearing down 11 miles of  I-275 - from downtown to Bearss Avenue - and replacing the interstate with a street level rail boulevard. This Tampa centric tear down/rail boulevard project will require AFT transit tax funding and lots of it.

At the same time, the regional transit agency TBARTA, is using state tax dollars to pursue a regional Bus Rapid Transit (BRT) service. Their proposed BRT service will run on I-275 from St. Petersburg to Wesley Chapel. TBARTA's proposed BRT requires the interstate the MPO anti-car brigade is pursuing tearing down.

And also at the same time FDOT is planning improvements for I-275 that will add capacity, improve safety, and make improvements to accommodate TBARTA's proposed regional BRT service.

Who is on First?

And there's more absurdity. Along that same I-275 major north-south corridor, HART is using tax dollars on proposals to use road diets to remove lanes of vehicle traffic on Nebraska and Florida Avenues for bus only lanes. Nebraska and Florida are State roads that run parallel to I-275. These BRT transit projects will also require AFT transit tax funding.

Imagine the congestion chaos caused by tearing down I-275 and also removing valuable lanes of vehicle traffic on Florida and Nebraska Avenues that run parallel to I-275. And doing this at the same time the AFT anti-car brigade shuts down funding of new road capacity for 30 long years.

Apparently according to AFT, "fixing and improving" roads includes removing them.

All "Eyes" are now on the Florida Supreme Court as we await their ruling.

We hope the AFT transit tax does not survive at all.

And ends the AFT travesty - at least this round!