Continuing some further analysis you won't find anywhere else around Tampa Bay, we have some more data to dissect.

Again, using the Tampa Bay Times Graham Brink's article on our increasing commutes as a starting point, Brink states
Pity the 117,000 Tampa Bay workers who spend at least an hour getting to work and then have to do it again going home.
No joy for those folks in their commutes, for sure. 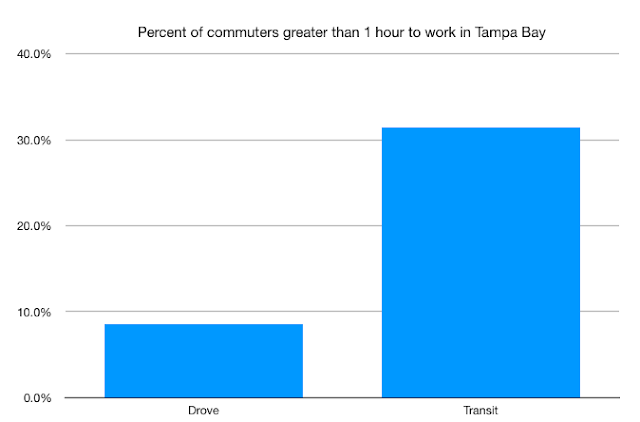 But that is only 8.5% of drivers commuting to work, compared to 31.5% of transit riders taking more than an hour.

Again, another data point confirming that choosing transit over driving increases the likelihood of a long commute.

But don't just the math. What does the Google say? We can compare driving and transit times for a few routes in the Tampa Bay area.
* Travel times from maps.google.com 2:15 PM on October 25, 2019

Hopefully it is not a surprise that it is faster, and in most cases, substantially faster, to drive these routes than to use transit.

Note these times may vary based upon traffic conditions and transit routes available at that time. For example, is one choses to wait an hour at Tampa Airport, they can take HART route 300 leaving at 3:39 PM or a 39 minute commute compared to a 51 minute ride leaving closer to 2:15 PM. But it's only 20 minutes to drive.

But how do we compare to other municipalities when it comes to commuting?

We are constantly told by our elite thinkers Tampa Bay has among the worst transit systems in the country. We need to be more like Charlotte, NC, where they are spending billions of dollars on expanding light rail and bus transit. Not sure Charlotte is up to the Jetsons, yet, but it has to be better than Tampa Bay, right? 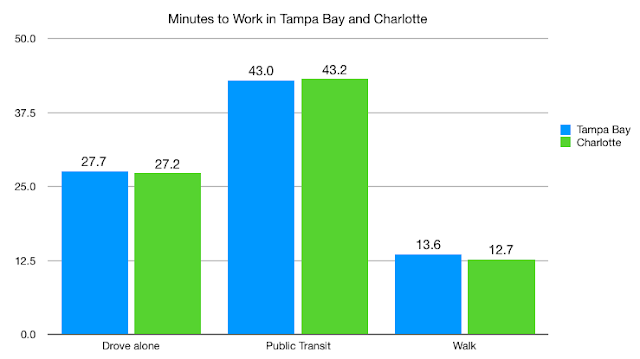 It might come to a surprise for some (but not us), that despite the billions spent on transit in Charlotte (and more yet to spend), they are not better off in commuting to work than Tampa Bay, where we have yet to waste billions on transit.

In fact, the Charlotte Observer reported last year Charlotte Area Transit ridership had been losing riders faster than any other large U.S. cities.
Across the nation, most big cities are losing transit riders.
But nowhere is the decline more pronounced than Charlotte, which is shedding transit passengers faster than any of the other 50 largest cities, according to data from the Federal Transit Administration.
...
For the last six months, ridership has dropped by 19 percent. That means nearly 1 in 5 transit riders has left the system — for now at least.
Read more here: https://www.charlotteobserver.com/news/politics-government/article209424959.html#storylink=cpy
...
Julie Eiselt, the mayor pro tem, said she wasn't aware of the large declines. But it isn't enough for her to reconsider the city's plans to spend as much as $7 billion on more rail lines and bus service.
Read more here: https://www.charlotteobserver.com/news/politics-government/article209424959.html#storylink=cpy
Don't look at the data! Charlotte's commuting to work is getting worse, just like Tampa Bay, and transit riders are leaving, because its faster to drive.

But Charlotte has billions more to spend, and better yet, they have a plan!

"I would like to ride transit more if I wasn't so busy working on the transit issue. ... It's not very amenable to my kind of schedule. I'm not an 8-to-5 in one place type of person."

"There's no way you can do it. For office workers who have set hours and set places, it works very well…I have to have a vehicle."
"I'm in and out of the office all the time, so it would be really inconvenient for me to use the bus system."
Pat Kemp is just like the other 1.2 million auto commuters in Tampa Bay whose time is too valuable to wait on transit.

But All For Transportation thinks they have an even better plan to "make commute times better". 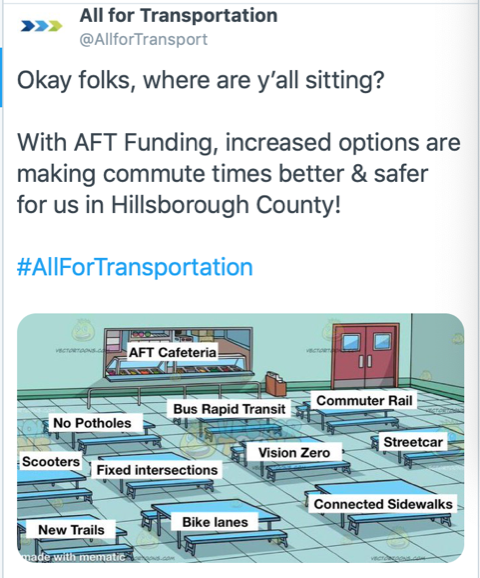 What is AFT missing in their "AFT Cafeteria"?

Roads! As we have repeatedly reported, they have no plans for roads. Their plan will not "make commute times better", by not addressing driving and roads, which the vast majority of commuters use, their plans will make commuting worse.

If you want to know what the All For Transportation outcome of spending $7 - 8 billion on transit and billions more everything else except roads in Hillsborough may look like, Charlotte provides a pretty good case study of Hillsborough's future misery.