Will the Tampa Bay Rays plan for a split season work in Tampa Bay? 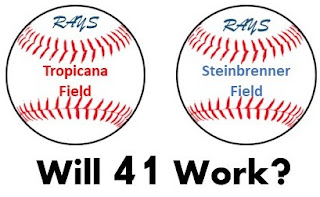 ]At the height of St. Petersburg’s struggle to acquire a major-league  baseball franchise in the late 1980s Selig notably said, “St. Petersburg is not a major-league  baseball market.”
Selig’s prediction was more accurate than he every could have imagined. Even now, decades later, the argument about whether Tampa or St. Petersburg can support the Rays continues.
Check out the Tampa Bay Times By Charlie Frago St. Pete and Tampa City Council chairmen have different vision for Tampa Bay Rays.
The Bucs do ok; USF football is thriving, and the Lightning has an energized fan base, but the Rays have never been able to get a foot hold.
Quoting from Frago’s article: Gerdes (St. Petersburg City Council Chairman) said the attendance woes in St. Petersburg—"a track record that stinks"—aren’t likely to change if the team relocates across the bay.
Gerdes counterpart Tampa City Council Chair Luis Viera disagrees, but as we have seen politician’s politician's ability to predict sporting teams success is dismal at best.
Also, on the table is the Rays proposal to split the season with Montreal, but neither City seems taken by that idea.
In the meantime, the big dollar players in Tampa are starting to have some second thoughts about plunking down a gazillion dollars for a new stadium that may only end up with 41 games.
While I appreciate Stu Sternberg’s concept that local attendance per game will increase if there are only 41, I think it is flawed logic.  My prediction is there will just be 41 games in St. Pete with mediocre attendance rather than 82.
Would 41 games in Tampa do any better? Hard to say but would you put any money into a new stadium on that gamble?
How about this. St. Pete agrees to allow the Rays to play 41 games at George Steinbrenner field and let’s see if the Tampa baseball fans can outscore the St. Pete Fans in attendance.
Then we will finally know if Bud Selig was right.
E-mail Doc at mail to: dr.gwebb@yahoo.com or send me a Facebook (E. Eugene Webb) Friend request. Like or share on Facebook and follow me on TWITTER  @DOC ON THE BAY.
See Doc's Photo Gallery at Bay Post Photos.
Disclosures: