The Tampa Bay Times recently published yet another misleading editorial blaming cars for all that ails us.
The best thing Tampa Bay leaders can do to fight climate change is simply get more cars off the road. But that’s a hollow hope in a region that still lacks meaningful mass transit, and where building more toll roads is seen as progress. A sense of urgency in solving the transportation problem is no longer just about convenience and economic competitiveness — it’s also now about global warming. Tampa Bay is particularly vulnerable to every aspect of climate change, from sea level rise to more powerful hurricanes. That’s something to ponder while stuck in another gridlock on the Howard Frankland Bridge.
Cars are the problem. Transit will help. Are you sure about that?

The article cites a New York Times analysis, which in turn cites data collected by Boston University. The NYT has this cool looking map. 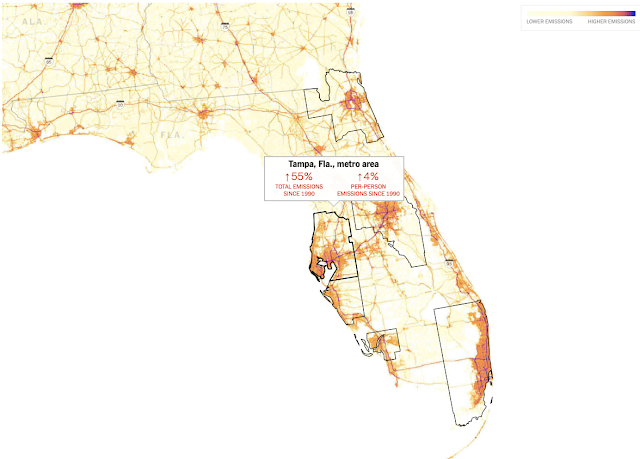 This map shows the overall emissions in Tampa metro have increased 55%, and 4% per person since 1990.

It's that 4% that has given the Tampa Bay Times the vapors. Sounds horrific.

For starters, Tampa metro population growth (which the Times never mentions), assuming Hillsborough, Pinellas and Pasco as indicated in the above map, was 1.92 million in 1990, and 2.905 million in 2017, for an increase of 47%. Most of that growth was in Hillsborough (68% growth) and Pasco (86% growth) in that period. Population growth is the biggest contributor in this analysis which the Times ignores.

But cars are much more fuel efficient these days.

As more fuel efficient vehicles increase market share, vehicles contribution to CO2 emissions and other pollutants will decrease, as they burn less fuel. This is largely confirmed by the Hillsborough Environmental Planning Commission, who reports overall improving air quality over the years despite the growth in Hillsborough.

But for now, CO2 emissions are increasing slightly faster than the population increase in the Tampa Metro area. Why is that?

The Times does not state the impact to individual commute times. Tampa MSA mean commute time from the American Community Survey increased from 25.5 mins in 2010 to 27.6 mins in 2018, 2.1 minutes, or an 8% increase. The likely factors for this is increase in congestion or further commutes.

The Times avoids the elephant in the room. 87.9% of Tampa Bay commuters drive to work.  The next largest is worked at home at 7.3%. Transit is 1.3%. More people walked (1.4%) than rode transit. Road capacity clearly has not kept up with the population growth, therefore commute times increase, which in turn increases the CO2 emissions. The lack of road capacity increases commutes and idle time, which overtakes the improved efficiencies and reduce CO2 emissions with the newer vehicles.

The Times blames cars and cows too(!) for an increasing commute time and increase in CO2 emissions. The Times answer? Transit, of course.
Sure, cows and coal-fired electric plants may be bad for the environment. But transport is the single worst source of greenhouse gas emissions in the United States today, and our cars, trucks and SUVs are the major culprit. Nationally, we drove 46 percent more miles in 2017 than in 1990.
Until Tampa Bay leaders embrace real mass transit, this problem will only get worse.
But transit buses are worse when it comes to emissions.

This chart shows average per-passenger fuel economy of various modes of travel. Bet you did not know that "transit buses are not very efficient at their current ridership rates, where, on average, a given bus is less than 25% full" according the US Dept of Energy Alternative Fuels Data Center.

Therefore, transit buses, which are the predominant form of transit (but only 1.3% of commuting according to the 2018 American Community Survey) in Tampa Bay now and for the foreseeable future, are nearly 25% worse for CO2 emissions for on a per-passenger basis than either cars or light trucks.

Or, another way to look at the data is every bus rider is contributing 25% more CO2 emissions than if they drove a car. Perhaps fewer (and continually decreasing as current transit ridership trends indicate) transit riders is a blessing for Tampa Bay.

Let that sink in.

Clearly transportation is a big emitter of CO2 emissions, as is electricity generation.

[Cited from the source] This graph displays the breakdown of greenhouse gas (GHG) emissions (in million metric tons CO2 equivalent) by economic sector. GHG emissions from the transportation sector have increased 22.2% from 1990 to 2017. Transportation emissions have also increased from 24.0% of total emissions to 28.9%, the largest increase in percentage points of any sector. The electricity generation sector has seen the greatest emissions reductions from 1990 to 2017, down 1.9 percentage points overall.

Further analysis confirms most of the electricity generation sector emissions reduction occurred from 2010 to 2017, a decrease of 23%, due primarily from converting from coal to natural gas as the primary fuel.

Next, consider vehicle miles traveled in the US and its overall impact to emissions.

[Cited from the source] This chart shows trends in total vehicle miles traveled (VMT) in the United States (expressed as a moving 12-month count) from 1971 through 2018. The long rise in the number of vehicle miles traveled has seen three periods of flattened growth or decline, triggered by the oil price spikes of 1974, 1979, and 2008. The VMT flattening that started in 2008 continued long after oil prices recovered, largely because of an economic recession. However, in recent years, VMT has seen substantial rises largely because the U.S. economy recovered and petroleum prices remained relatively low.

Yet more further analysis confirms a 51% increase in vehicle miles traveled (VMT) from 1990 to 2018, while the population grew 30%. Note above "[t]ransportation emissions have also increased from 24.0% of total emissions to 28.9%, the largest increase in percentage points of any sector." First of all, this is a statistical misunderstanding of the data, since overall GHG emissions have been on a significant downward trend since 2007, while transportation's contribution to emissions have actually been only slightly down since then. The Alternative Fuels Data Center (AFDC) also states "GHG emissions from the transportation sector have increased 22.2% from 1990 to 2017". But looking even more closely confirms CO2 emissions from transportation is nearly flat since 2010, and slightly decreased from 2007, while electricity generation was declining rapidly. Despite the VMT increase and the population increase, the most surprising aspect is that CO2 emissions from transportation is not much greater, a testament to the improved efficiencies, and thus per mile CO2 emissions reduction, of motor vehicles over the last 38 years.

The Times also notes that this was the "the first year in which cars, trucks and SUVs began to spew more carbon dioxide than electric utilities across the nation". They forgot buses "spew" CO2 as well.
Utilities are cleaning up their act and reduced emissions each year in the five years leading up to 2017, the last year for which the EPA has records. But vehicle emissions rose every year in that period.
The Times conveniently cherry picks the data to suit their narrative. As illustrated in the chart below, electric utilities have a downward trend on emissions from 2007 with a couple of exceptions. While there has been a slight increase in transportation emissions in the last 5 years, transportation emissions in 2017 are still lower than every year from 2000 to 2008. 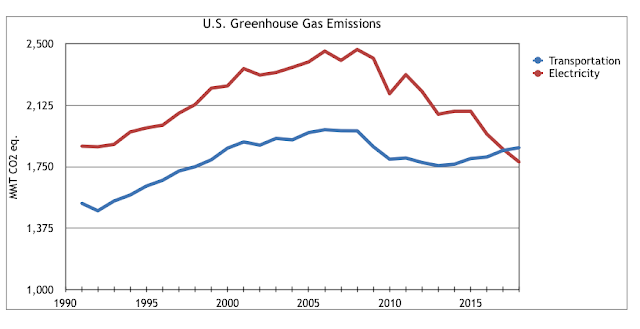 But there's more! Another relevant data point over this time period is US Gross Domestic Product (GDP), or the primary metric of the economy. It might be interesting to compare the GDP vs. GHG Emissions (mash up from the US Federal Reserve GDP data and AFDC GHG emissions data). Energy consumption is highly correlated with economic growth, as well as GHG emissions, at least in the past. 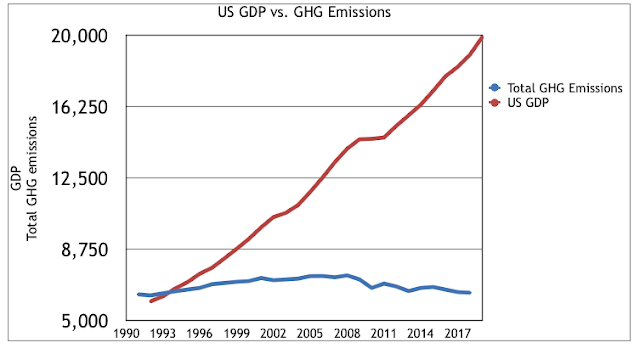 While the GHG/CO2 emissions data has been relatively static from 1990 to 2017, and on a downward trend since 2007, the US GDP has more than tripled! On a per person, GHG per GDP $, or vehicle miles traveled in those CO2 "spewing" cars, we are on track for reducing CO2 emissions.

That sounds like a success story that we need to keep up.

But according to the Times, the end is near unless you give up your cars.

Also, the Times neglected to mention the electric utilities reduction in CO2 emissions is largely due to their large scale conversion from coal to natural gas fuels, which has about 1/2 of the CO2 emissions of coal.  This reduction is definitely not due to wind and solar electricity generation which are still minimal contributors to power generation.

This CO2 reduction since 2007 is confirmed by U.S. Energy and Information Administration, although there was slight increase in 2018. 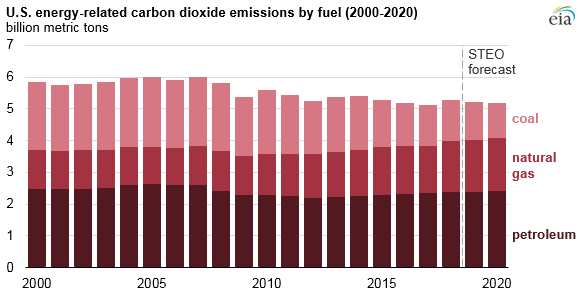 A colder winter and increased economic growth drove some of the emissions growth. More normal winters are forecast as well as some reduced economic forecasts.

This is a relevant fact, since Tampa Electric is meeting some resistance in their plan to convert part of Big Bend Power Station to natural gas generation, reducing costs and reducing a major CO2 emitter in Tampa Bay. Hillsborough County commissioners Kimberly Overman, Pat Kemp, and Mariella Smith have come out against Tampa Electric's plans, while they also stymie needed road projects to relieve congestion, which will decrease CO2 emissions from vehicles.

If the Times and the BOCC commissioners cared about reducing CO2 emissions, they would support the Big Bend Power Station conversion to natural gas.

The increase in natural gas and reduction in coal are the primary drivers in the reduction in emissions. Tampa Electric has been coal dependent for too long.

Meanwhile, NASA reports the earth is getting greener.
From a quarter to half of Earth’s vegetated lands has shown significant greening over the last 35 years largely due to rising levels of atmospheric carbon dioxide, according to a new study published in the journal Nature Climate Change on April 25.
...
Studies have shown that increased concentrations of carbon dioxide increase photosynthesis, spurring plant growth.
So we may have more green space to enjoy while stuck in traffic.
Posted by EyeOn TampaBay at 5:30 AM