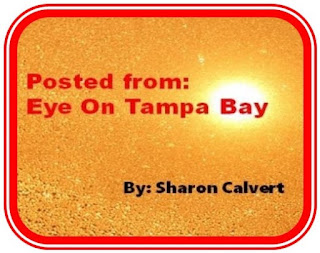 AFT misled voters last year when they sold their rail tax as a road tax to fix roads and reduce congestion. 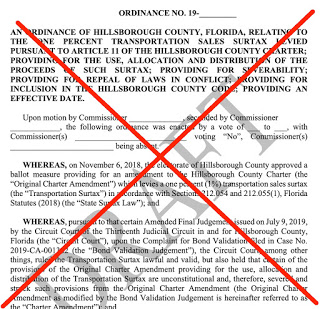 These four commissioners want to rush action to reinstate AFT's pre-determined spending allocations and funding prohibitions thru a county ordinance. They know all the legal issues have not been resolved.

But they scheduled a public hearing anyway for their proposed ordinance
at tomorrow's September 18, 2019 BOCC meeting at 10am.

These commissioners want to implement the "will of All for Transportation" which is to shut down funding for new road capacity and road widening NEEDS to fund costly rail project WANTS in Tampa.

AFT confirmed in a recent tweet their pre-defined "cafeteria" of spending allocations do NOT include funding for road widening or new roads. As we warned last year, AFT is a rail tax. 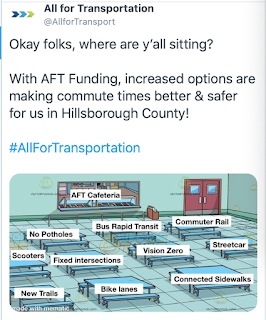 AFT misled voters last year when they sold their rail tax as a road tax to fix roads and reduce congestion.

There is no legal requirement for the county to reinstate any of AFT's spending mandates, percentages or allocations.

Don't be fooled by political rhetoric from AFT or anyone else, and parroted by local media, claiming the county commissioners must reinstate AFT's spending mandates because of the "will of the people".

That is a false claim according to the Circuit Court judge who threw out AFT's spending allocations.

The Circuit Court judge who threw out all of AFT's spending mandates as illegal and unlawful left the tax itself standing. But he basically ruled the "will of the voters" was they only voted for a transportation tax and NOT AFT's spending allocations.

If a lower court judge ruled voters did not vote for AFT's spending allocations, why would any county commissioner want to reinstate them?

The county commissioners had nothing to do with creating AFT's spending mandates - no governing entity was involved. The fact is AFT crafted their legally flawed transit tax in the dark behind closed doors with a select few influential and wealthy power brokers.

And AFT never had their massive transit tax legally vetted.

As a result of AFT's negligence and/or incompetence, AFT subjected voters to a legally flawed transit tax referendum and created a big legal mess. The legal issues, now at the FL Supreme Court, have yet to be completely resolved.

AFT has never informed the public how they calculated "their" pre-determined spending allocations.

Because according to the Deposition of AFT's Chair Tyler Hudson in April, he was asked (at about page 42) numerous questions about how AFT calculated their spending percentages. Hudson/AFT and his lawyers responded that information is
"protected by the First Amendment, it's political speech, free speech, it's not relevant and the line of questioning will have a standing objection to not response to those—that line of questioning."
AFT admits "their" spending mandates are political and part of their political strategy. Thus, they refuse to publicly provide important information critical for decision making about a 30 year $16 Billion transit tax.

And worse AFT tried to hide their political strategy and motivations by excluding any reference to their spending mandates in their ballot summary language - the only information every voter is guaranteed the opportunity to read before voting. Operating with such secrecy and deception about a $16 Billion transit tax is appalling.

County commissioners should always embrace governing in the Sunshine, not rewarding those who govern in the dark and mislead voters.

At a workshop in April the commissioners were warned by county staff - after spending $1.4 Billion of AFT tax proceeds over the first 10 years of the tax as AFT mandates will cause a massive funding gap for road widening needs.
Therefore, the four county commissioners pursuing reinstating AFT's unfair and unbalanced spending allocations cannot claim ignorance. These commissioners know that implementing the "will of All for Transportation" will create congestion chaos and gridlock.

Other than kowtowing to the All for Transportation political committee and their wealthy special interests donors, there appears to be no positive upside for these county commissioners to reinstate AFT's unfair and unbalanced spending allocations.

The downside is obvious.

And taking such actions while all the legal issues have not been resolved is foolish and could cause more legal problems. Putting taxpayers at more risk is unacceptable.

This ordinance is bad policy that rewards those who misled voters, subjected voters to a legally flawed massive transit tax and created a big legal mess.

To voice your opposition, contact the county commissioners or show up at the public hearing tomorrow. Tell them you oppose the ordinance to reinstate AFT's unfair and unbalanced spending allocations when there is no legal requirement to do so and the commissioners need to allow the judicial process to completely resolve all the AFT legal issues.

The county commissioners can be held accountable for their actions.