A Tale of Two Cities and Sea-Level Rise - St. Petersburg 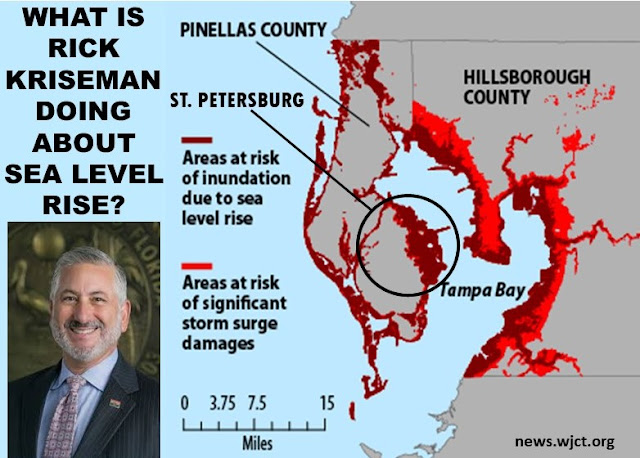 Now  a look at two bay area cities and their view and approach to sea-level rise. First St. Petersburg...
St. Pete Mayor Rick Kriseman has made a big issue out of Climate change.
Unfortunately, most of his concerns are more political than practical.
What is important is the fact that Kriseman’s efforts have been more politically grandiose than effective and in reality, his actions would indicate a complete lack of understanding of the primary impact of climate change on Florida: sea-level rise and storm surge due to tropical storms.
Here is a quote from a Kriseman Campaign Flyer: “Because of the dangers climate change poses to our city, I pledged to transition St. Pete to a 100% clean energy city. We are preparing for rising seas, volatile weather, and increases in the number of powerful storms.”
If Kriseman and his administration were actually capable of reaching that goal, which they are not, it is unlikely that it would stop the water rising in Tampa Bay.
High tide flooding is already prevalent along the downtown coast line of St. Petersburg and will continue to get worse.
Clean energy and “carbon footprint” are two of the key buzz words in the climate-change  argument. These two terms are invoked by politicians because they are the mechanisms' whereby massive amounts of money can be made by prospective large campaign contributors.
Let’s look at two of the most glaring examples of Kriseman's real sea-level rise position.
If you really believe in climate change, then you must accept the fact that the sea level is going to rise.
When you are the Mayor of a low-lying coastal City, your climate-change concerns should be how do I protect my City practically and financially. And how do I make development decisions that are not compromised by the impending results of climate change over the next two decades.
Downtown development – Pier Park
Kriseman has pushed the $20+ million development of Pier Park, which essentially sets at sea level. Was that a wise utilization of public funds?
Thinking in the climate change/sea rise level rise community says that Beach Drive will likely be somewhere between 2nd and 3rd Avenue if the sea-level rise predictions are even close to being accurate.
Maybe a better expenditure of those funds would have been to begin to set aside funds to buy back coastal lands to eliminate the impending disaster.
Renewable energy, green buildings and all the rest of the climate-change hoopla make great political fodder, but a Mayor, who believes that the climate is actually changing will not waste his taxpayer’s money on things the results of climate change and sea-level rise may swallow well before the end of their useful life.
Wastewater treatment – The South West Wastewater Plant
News Channel 8 Jeff Paterson September 15, 2016: St. Pete mayor blames climate change for release of wastewater into Tampa Bay
Kriseman must not bother to read his own press clippings.
The South West Wastewater treatment plant literally sets at sea level. However, he is pouring millions into this sea level endangered facility and making plans for it to become the major wastewater treatment facility for the entire City.
What happened to his climate-change argument in this scenario?
More importantly what will St. Pete do when the water level starts to rise at the South West plant, or a major storm surge makes it inoperable?
That’s a climate change/sea rise level rise question that deserves an answer.
These are just two of the sea level rise issues Rick Kriseman has created while he “worries” about climate change.
Climate change with Rick Kriseman is the same as it is with all Democrat politicians. It is a great stump speech issue, but when it comes down to applying the climate-change problem to real-life decisions, Rick Kriseman simply does not have the will.
E-mail Doc at mail to: dr.gwebb@yahoo.com or send me a Facebook (E. Eugene Webb) Friend request. Like or share on Facebook and follow me on TWITTER  @DOC ON THE BAY.
See Doc's Photo Gallery at Bay Post Photos.
Disclosures: