The Impeachment Fanatics– will the Democratic Political Establishment Ever Grow up? 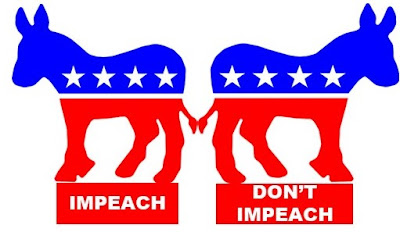 Tampa Bay, Fl
Opinion by: E. Eugene Webb PhD
Author: In Search of Robin, So You Want to Blog.
Updated material posted earlier.
I have watched with both humor and growing concern as the US House of Representatives now controlled by the Democrats wrenches in a headlong convulsive rush to get Trump at all costs.
The problem is there is a real price to be paid if this obsession of investigations and subpoenas continues.
In order for a democracy to go forward there are certain things that must be accomplished regularly.  For now, the Democrats and their committees have turned the People’s House into a carnival as their leader’s lurch and gasp for air in a constant tirade against the Trump administration.
Point is Trump really doesn’t care, and Republicans are enjoying to some degree watching the Democrats make absolute fools of themselves at every turn.
Their obsession with the thought that another four years of Trump could lead to an all-out collapse of democracy as, we know it is more than a little hypocritical as their growing number of presidential candidate's race to the left and socialism.
Nothing kills off a democracy faster than socialism. So maybe what the Democrats need to do is spend a little more time listening to their own rhetoric.
If the Democrats main focus was to take back the Whitehouse, you would think they would be working toward major pieces of legislation that would actually help the American people. Instead, House and Senate Leaders are more taken by the side show and the drama and the prospect of appearing on CNN than they are by the real prospect of governing.
I have heard two viable comparisons, the first from a couple of well-versed commentators on NPR, Brooks and Shields, where they indicated their view is the Democratic leadership is playing right into Trump’s hand for the general election. This is his kind of battle, and he loves it.
The other was on one of the Sunday morning news shows when a panelist made the comment that Trump is using the old “rope a dope” technique on the Democrats. The prospect is Schumer; Pelosi and Shift will keep flailing at the air going more overboard until they wear out themselves and their audience. In the meantime, accomplishing nothing legislatively they can hang their hats on.
Perfect grist for the Trump mill when he decides to use it.
At some point, the Democrats will have to turn away from fanatical desire to get Trump at all costs and start running a campaign that can win. And that means moving toward the center.
My current guess is the Democratic Nominee will be Michelle Obama with a last-minute dramatic entrance to save the Democratic Party from itself.
For now Michelle Obama has refused to comment on the Biden Kamala Harris dust up in the debates. Check out This article from The Hill by Rebecca Klar: Michelle Obama mum on Biden-Harris 'dust-up,' withholding endorsement
I know, I know she has said and continues to say she is not interested, but as her husband’s legacy continues to be dismantled by Trump and the Dems move ever more left a saving angel may just be what the Democrats need.
For now, having someone else taking Bidden to task and tarnishing his image is probably not that disturbing Michelle or Barack.
E-mail Doc at mail to: dr.gwebb@yahoo.com or send me a Facebook (E. Eugene Webb) Friend request. Like or share on Facebook and follow me on TWITTER  @DOC ON THE BAY.
See Doc's Photo Gallery at Bay Post Photos.
Disclosures: