Tampa Bay, Fl
Opinion by: E. Eugene Webb PhD
Author: In Search of Robin, So You Want to Blog.
If you missed part, one check it out at Sea-Level Rise A Fact, A Political Foot Ball, a Growing Business
If you want to get a hint as to how we are actually approaching sea-level rise simply Google: sea level rise what are we doing.
This should be an eye-opener for you. Note the links presented by Google. Try to find one link that provides any detailed information on a practical scale for what we are or should be doing.
Lots of so-called scientific facts, links about making money (Carbon credits), facts about the sea-level rise but no links to plans or serious suggestions about what citizens, local 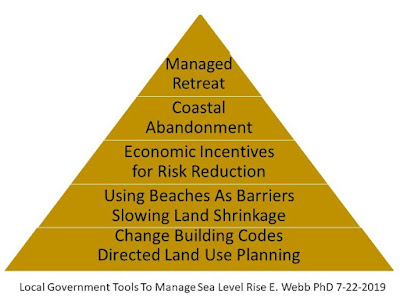 The problem is the two groups most interested in this issue are the politicians who like to bash each other about their opponent's position for or against, believing in climate change or being a “denier” and the group looking to exploit the climate change/sea rise level rise for the maximum about of money they can literally steal.
From solar panels to carbon credits, this latter group is much more interested in your money than the security of your waterfront property.
When the public gets in trouble the first place, they usually look is to their local government for help. When that fails, they may look to their county or parish, and then to the state and ultimately to the federal government.
The problem is none of these entities are taking any practical steps to mitigate what will be a sociological and economic catastrophe.
In fact, the two levels of government best positioned to begin to mitigate the impact of sea-level rise, cities and counties, are, generally, doing more to deepen the actual crisis than they are helping to prevent it.
By continuing to allow massive development of coastal and low-lying areas these local governments are stoking the flames of their own destruction.
Cities and counties along the coastal portions of the united states continue to let development of coastal and low-lying areas happen at a frightening pace.
When the sea-level rise becomes an obvious reality, the developers will be long gone but those owning the soon to be flooded property will come to their local government demanding the problem be fixed. Quite likely there will be no fix since nothing is currently being planned and chaos will ensue.
Property values will tank; property tax revenue will take a major hit, and the very resources needed to even think about mitigation of the flooding will no longer exist.
Is it time to begin limiting coastal and low-lying area development? Time to begin to move people back away from the areas now indicated by sound science that will flood as sea levels rise. Time to stop building massive high-rise developments at the water’s edge.
You may be reading this thinking: not my problem. I don’t own any of that property, and I simply won’t buy any. The problem with that kind of thinking is the magnitude of this problem will be so great that it will impact government revenue from educating your kids to providing basic public services.
No matter who you are your property tax will go up, because unless we take some preventative steps now the cost of resolving this problem in real time could crush the system of government as we now know it.
E-mail Doc at mail to: dr.gwebb@yahoo.com or send me a Facebook (E. Eugene Webb) Friend request. Like or share on Facebook and follow me on TWITTER  @DOC ON THE BAY.
See Doc's Photo Gallery at Bay Post Photos.
Disclosures: