If Variety reviewed the Mayor’s Forum on the Arts, held Wednesday night at Hillsborough Community College, the gathering would have been described as nothing less than “boffo.”


In fact, the venerable staple of entertainment news might have showered the Tampa event with more superlatives than were heaped on “Gone With the Wind.”
It was that electric.
The 500 artists, cultural organization executives, businesspeople and just plain arts supporters who crammed into the HCC auditorium not only cheered Jane Castor’s opening remarks but every subsequent mention of her name.  The Tampa mayor’s coming out as a pro-arts leader contrasts sharply with her predecessor Bob Buckhorn’s middle-finger attitude towards a community steeped in culture and diversity.
Emcee Paul Willborn observed, “With the arrival of a new mayor who understands the growth and potential of the arts, it’s the beginning of a new era.”
Castor emphasized the importance of a visible arts scene, declaring “arts and culture defines us as a community.  Besides enhancing, educating and entertaining us, the arts represents our diversity.”  She has an important ally in City Councilman Bill Carlson with the arts promotion effort.
The mayor announced instituting an Art on the Block program where art would be displayed in Tampa’s many neighborhoods.  The benefits, she explained, would be opening communication and fostering cooperation between the city and its citizens.
Thirteen panelists held sway on three topics for approximately a half hour each: a vision for the arts, the arts as an economic engine, and growing grass roots for the arts.  The ideas promulgated by each panelist were as diverse as the arts community itself.
But panelists were unanimous on one point: the Tampa arts narrative needs to be disseminated, not only locally and within the state of Florida but nationally and internationally.  The lack of messaging about a key component of Tampa life resonated with the audience. 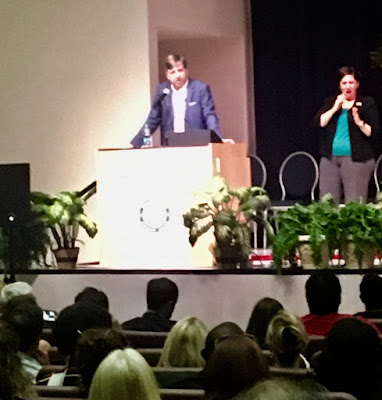 Paul Wilborn ran the show at Tampa’s arts forum
Other major points of panelist agreement:
—The arts community need to share its vision and collaborate with local business and political leaders.
—Arts as a business, a major business in fact, cannot be overemphasized.
—Inclusiveness and universal access are necessary for a thriving arts scene.
—Don’t “chase other cities” in the quest to become an arts destination, an apparent reference to St. Petersburg which has emerged as a “city of the arts” with its own identity.
Bob Terri, who serves on the board of the Arts Council of Hillsborough County board, encapsulated the enthusiasm generated by the forum.
“I’m genuinely excited about the city’s interest in supporting the arts,” he said. “Tampa has a history as a blue collar, sports-oriented city but that is changing.  We have matured into a locale that can support both sports and the arts.”
The Arts Council and its programs receive some funding from the Hillsborough County Board of County Commissioners; the Department of State, Division of Cultural Affairs; the Florida Council on Arts and Culture, and the State of Florida.
Whether the City of Tampa—coping with its own budget squeeze—will be a financial contributor in the near future or not is questionable.  For the time being, the arts community will settle for Tampa as a fervent cheerleader, a significant upgrade from the moribund Buckhorn era.
Cross Posted with permission from: Tampa Bay Beat