All for Transportation's Pervasive Dishonesty 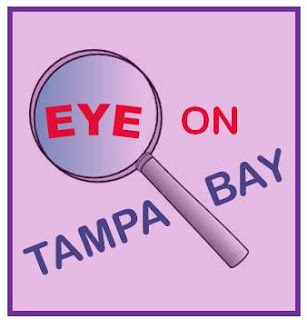 All for Transportation (AFT) has been dishonest from the start. They tried to create a false narrative last June that their tax hike ballot initiative was a "grassroots" initiative launched by everyday citizens.

That was quickly debunked.

The AFT tax hike initiative was a totally paid professional campaign job assisted by some political insiders (more to come on that subject).

AFT did not use grassroots volunteers. AFT paid GRSG Company, a professional canvassing company out of Minneapolis, MN over $87K for paid canvassers.

AFT spent $4 million on a marketing campaign funded almost entirely by special interests. AFT's campaign filings reflect about $2.5 million was donated from 10 donors in a county with a population of 1.4 million. Jeff Vinik and his associated entities alone contributed almost a million dollars to AFT's coffers.

From AFT's misleading ballot language to AFT making exaggerated claims for which they provide no evidence to back up their claims, to AFT refusing to call their referendum a tax hike and not properly informing voters their ballot initiative is a 30 year $16 Billion tax hike to AFT's deceptive mailers claiming their tax hike was going to improve roads when AFT provided no funding for new road capacity, AFT has been dishonest and deceptive.

AFT's website allfortransportation.com appears to have disappeared. What are they hiding? 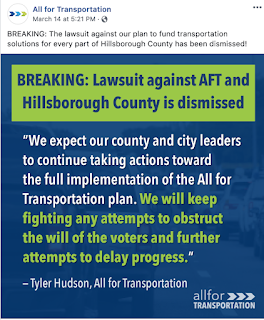 Commissioner White's lawsuit was not filed against All For Transportation (AFT). AFT is a political committee who got their 30 year $16 Billion sales tax charter amendment on the ballot and then ran a $4 million political campaign to get it passed.

AFT decided to insert themselves into White's lawsuit by hiring high priced lawyers to intervene in the lawsuit.

More egregious, AFT insinuates the judge totally dismissed the case - on its merits. That insinuation is misleading, totally false and so dishonest. Judge Rex Barbas ruled in March that Commissioner White could not file the lawsuit as a county commissioner and gave him 10 days to refile.

And White did. He filed an Amended Complaint as we posted here.

Read the comments of the AFT supporters who believed AFT's dishonest claim White's lawsuit was over and done.

Bob Rohrlack, President and CEO of the Greater Tampa Chamber of Commerce, posted this comment about AFT's dishonest claim.

It appears Rohrlack drank AFT's kool-aid without checking out the actual ruling. That does not reflect well on the Chamber.

All for Transportation's Twitter account @AllforTransport is also still up and they tweeted the same dishonest information about the lawsuit dismissal that they posted on their Facebook page. 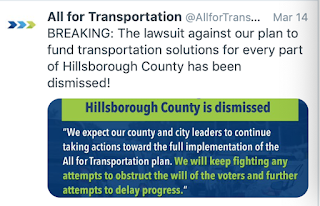 And AFT's dishonesty is pervasive because they continue to be dishonest.

Those who decided to closely associate with AFT's deceptiveness and dishonesty because the end justifies the means have no one to blame but themselves for the big mess AFT has created.

They chose to ignore potential serious legal issues that were raised before the election and now must be formally resolved in a court of law.

And what is shameful is AFT's pervasive dishonesty must have the blessing of their biggest donors.

Posted by Sharon Calvert at 1:35 PM


This post is contributed by EYE ON TAMPA BAY. The views expressed in this post are the blog publisher's and do not necessarily reflect those of the publisher of Bay Post Internet.