Rebutting Rhetoric to Reign in Recklessness

The transportation issue in Tampa Bay today consists of lots of kabuki dancing, lots of posturing, some street theater, some insider ball game scheming and even an attempted power grab. As taxpayers keep enriching the same consultants over and over for transit study after transit study, the rhetoric soars with dishonesty, deception and misleading information.

And all of this is done at what cost and at what success?

The attempt to extract millions and billions more from taxpayers for transit services that costs too much, does too little and benefits too few continues. Insanity is continuing to do the same thing over and over and expecting a different outcome - especially as transportation and traditional transit are being disrupted by innovation and new technology.


As a side note, the Orlando area is vastly improving and expanding their roads and interstates all over Central Florida while Tampa Bay has dithered with malfunction junction for decades and a Howard Frankland bridge northbound bottleneck that we bet has caused numerous folks to miss or almost miss their flights.


A state priority should be to move traffic faster through the intersection as welcomed improvements to I-275 and I-4 funnel more cars and trucks into the mix.

Surely if the state can spare hundreds of millions of dollars to help private, profitable railroads improve their freight tracks through the boondocks, it can find enough money to add a few lanes to an urban junction used by tens of millions of cars and trucks a year.

The constant shortfall of construction money suggests the local legislative delegation needs to do a better job advocating for local transportation improvements. And it suggests that Florida's congressional delegation needs to make more noise about the unfair return on federal gas taxes collected in Florida. For decades Florida drivers have helped pay for highway earmarks in states with much less traffic and growth. But most important, every political and civic leader in Tampa should agree that packing four lanes of high-speed traffic into three lanes is an intolerable way to treat ourselves and to welcome our guests. If, instead of playing petty political games, our state and local leaders would agree on top priorities such as fixing the junction, it wouldn't now face another decade of malfunction.

What happened since 2008? Tampa Bay keeps growing and even more cars and vehicles are using I-275 and I-4.

But then the media, special interests (especially those who would benefit) and some electeds figured out that if local taxes can be raised and a new long term pot of local money provided, they can gain access to another trough of federal dollars - federal transit grant monies. Those federal dollars come from the general fund aka debt. And that's how the tax hikes for rail boondoggles began.

While Hillsborough County overwhelmingly defeated the rail tax in 2010 58-42% and Pinellas County defeated Greenlight Pinellas rail tax by an even greater margin 62-38% in 2014, the media, the same power brokers and some electeds prefer to ignore the consent of the governed. And as we posted here, Hillsborough County's MPO has totally gone over the cliff of reality as they consider tearing down 10 miles of I-275 from downtown to Bearss, they try to use unsubstantiated data to create false narratives and ignore their own data.

As we reported here, the taxpayer funded TMA (which is the MPO's of Hillsborough, Pinellas and Pasco) invited a transit lobbyist to speak on how to pursue a transit referendum, how to deceive by whitewashing use of the word "rail" and how to confront critics. This nonsense alone should have shut the TMA down two years ago.

Remember what Commissioner Hagan said about the tax hike proposed by the Go Hillsborough debacle in 2016 that he supported?

Hagan said that by design, the ballot question does not mention light rail — a mode of transportation that opponents focused on and that was highly unpopular among suburban voters.

Of course, the fine print of the actual Go Hillsborough plan/projects for what the massive tax hike was going to fund included rail projects. Hmmm…Sound familiar? Being deceptive is consistently used by those who keep pursuing these massive long term transit tax hikes. But soaring rhetoric is easily debunked.

Here is the reality of transit in Tampa Bay.

We are told by special interests, some electeds and others that the Tampa Bay region is one big happy family that needs to speak with a single voice. Therefore, looking at the total population: Today’s population in Tampa Bay is about 3 million and we are expecting a million or more to move to Tampa Bay (Hillsborough, Pinellas, Pasco) by 2045 which could grow the population to over 4 million by then.

Looking at the largest county in Tampa Bay, Hillsborough County has a current population of about 1.4 million but only 1.5% (about 21K) use transit today and ridership has continued to decline. Hillsborough is expected to grow 600K by 2040 and may increase 800K over the next 30 years. The population by 2050 may be approaching 2.2 million. If transit ridership somehow quintupled from 1.5% today to 7.5% (which is totally unheard of), 165K would be using transit while over 2 million will be using roads.

Tampa Bay is growing and has a basic math problem. How we decide today to deal with the transportation issues of a growing region will determine whether we become gridlocked, get more congested or get any congestion relief.

Unfortunately once again deep pocketed special interests, with their media allies in tow, are pursuing another unnecessary massive 30 year sales tax hike to take $15 BILLIONout of taxpayers wallets and force $7 BILLION be spent on costly transit projects. The special interests are funding a citizen petition effort to get the 14% sales tax hike on the November ballot that would fund a plan worse than the 2010 rail tax (post for another day). 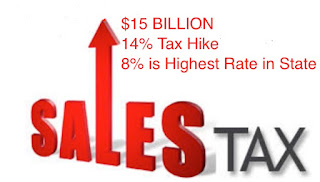 Asking taxpayers to unnecessarily raise their sales tax to 8%, the highest in the state, and get stuck paying billions and billions for costly transit, rail and streetcars that does nothing for congestion relief and benefits so few is fiscal recklessness.