Echelman floating art – where to put it 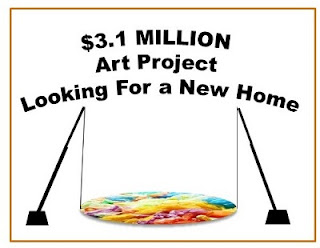 St. Petersburg, Fl
Opinion by: E. Eugene Webb PhD
Author: In Search of Robin, So You Want to Blog.
The $1.5 Million contract with Janet Echelman for a floating art canopy for Spa Beach was rejected by City Council in a 4-3 vote.
The project, which never made any practical sense for Spa Beach, may be looking for a new home.
You can get the details from a Tampa Bay Times article by Waveney Ann Moore: Grounded: St. Pete City Council rejects Echelman’s aerial artwork.
The size of the project had shrunk considerably, but the price had not totaling some $2.8 million with some likely over runs and no idea about the ongoing cost or subsidy that would be required to keep the floating art actually floating.


After the vote, there was talk of finding another location along the waterfront in the Pier district. I suspect any location along the downtown water front will be met with the same arguments.
The idea of a different location did get me thinking and here are some location suggestions:
Del Homes Park floating out over Lake Maggiore.
This location would be a major step in bringing our City’s desire for art and culture to the south side of St. Petersburg. The skyline out over the lake is naturally clear with no high rises or site issues. There are no FAA issues either and little likelihood a Cessna will end up tangled in the net.
Lake Maggiore Park
Just around the corner from Del Homes Park, the Lake Maggiore Park would provide for a magnificent view of the Echelman floating art and a breathtaking view of the sunsets as a backdrop for floating light sculpture. There is plenty of parking.
Either of these two, locations would also present spectacular views of the Echelman art from the Boyd Hill Nature Preserve.
If this art is the draw, the Echelman people say it is and is as exciting as the Mayor and Council member Rice say it is, then this could just be the thing to jump-start a big renaissance along 9th Street South and in the surrounding area.
I am sure those who have pledged the $1.3 million would be thrilled to see their contributions go to a project that could become the lynch pin of a redevelopment effort in South St. Pete.
On a lighter note if all of this fails perhaps the Mayor could convince his Planning Department to give him a permit for a scaled-down version that could float over his back yard.
Obviously, he would have to pay for it himself, but maybe some of those “contacts” would be happy to chip in a few bucks for an invitation to dinner every now and then. It probably wouldn’t be too pricey. A half million or so should handle it.
E-mail Doc at mail to: dr.gwebb@yahoo.com or send me a Facebook (E. Eugene Webb) Friend request. Like or share on Facebook and follow me on TWITTER  @DOC ON THE BAY.
See Doc's Photo Gallery at Bay Post Photos.
Disclosures:
Contributor to: Rick Scott for Senate