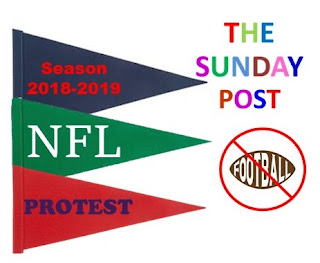 I was hoping that the players, the owners and the league could come to a peaceful resolution of the problem.

St. Petersburg, Fl
Opinion by: E. Eugene Webb PhD
Author: In Search of Robin, So You Want to Blog.
Summer is dragging to an end which means it is time for the football season to begin. All summer the NFL and the players union have bantered back and forth over the National Anthem protests.
Last year, I did a complete NFL boycott, including all products advertised on any of the NFL games.
I was hoping that the players, the owners and the league could come to a peaceful resolution of the problem, and football could get back to football.
Looks like that will not happen.
Between the insensitivity of the players, the pettiness of the owners and the inability of the league to think about anything but money it looks like the cloud of national anthem protests fueled by the media, sports writers and the liberal left will generally ruin football for another year.
Hopefully, advertisers and networks will have some serious conversations with all parties and convince them the current approach is a loose loose for everyone.
On the other hand, I really enjoyed the FIFA World cup soccer this summer. I have developed a much better appreciation for the game, and on a number of levels, it is much more entertaining and quicker than traditional football.
Less violence a lot more than line up grunt, throw the ball and see how many people you can hurt; the basic tenants of American football. I think as a society we may be moving beyond that.
It will be a bit tougher this year to add any new products or companies to my NFL sponsor boycott list as there appear to not be many new companies with goods to sell interested in being part of a violent game that disrespects what we stand for and coddle those who abuse.
If you're thinking about buying tickets or going to a few games, why not save the money or try a couple of soccer games or take the family to a movie. And, if you own a business and are considering a sky box, or a package of season tickets to use as promotion and handouts, I would think again. You could be throwing good money after bad.
Want to know who the NFL sponsors are? The NFL Players Association web site is a good place to start. Ford is a problem for me, I was seriously considering one of those new Broncos to replace my Jeep.
You can also Google NFL sponsors for 2018.
Last year, we moved about $4000 dollars from NFL sponsors to other suppliers and manufacturers of household products and beverages.
We are setting up a new house and have plans to buy a couple of cars, there may be some opportunities there.
I won’t be watching any of the games on television, and I will try to avoid the football sections of local sports shows and their sponsors also.
Sound like a lot of trouble?
Not really when you compare it to what all those who have served us to protect our freedom have given.
E-mail Doc at mail to: dr.gwebb@yahoo.com or send me a Facebook (E. Eugene Webb) Friend request. Like or share on Facebook and follow me on TWITTER  @DOC ON THE BAY.
See Doc's Photo Gallery at Bay Post Photos.
Disclosures:
Contributor to: Rick Scott for Senate