Public pressure has forced City to do something about the noise! Will it be enough?

What is St. Petersburg Mayor Kriseman, City Council and the Police doing to protect residents from noise pollution? I have been tracking the City noise issue since 2014. My answer is the City is doing as little as possible.

Public pressure is now required to combat the pro-business Chamber of Commerce and their Chairman of Grow Smarter Strategy, Ryan Griffin, who is a bar owner and an attorney. FOX News Tampa Bay interviewed Griffin in Proposed noise rule frustrates St. Pete bar owners. Fox News Dan Matics said, "Griffin is representing bar owners who are not happy. They say if you don't want to hear noise, don't live downtown."

Griffin said, "Few handfuls [of residents] of a certain location that seem to be registering most of the complaints." Griffin appears to have made an assumption without listening to the audio calls, reviewing the Police's Call For Service Reports, and Police Incident Reports. Griffin also fails to mention how much crime each bar location generated. Griffin needs to ask the Police for


each call made and the Call For Service Reports, which detail the nature of the incident, call date and time, was it resident refused or was an address provided, and the officer notes. He also needs to expand the search for the area residences because police do not always use the bar location. Sometimes, the police use the resident's location.

Then Griffin needs to share the data with the public.


...have embarked on a comprehensive process to assess and enhance the city's competitive position to support quality, diverse economic growth now and in the future.

Since this is a joint venture between the City and the Chamber, Mayor Kriseman is telling residents to move if they do not like the noise! This is a negative reflection on our City, and our Mayor.

Watch Ryan Griffin interview on FOX News 13 Tampa Bay and decide for yourself!

The City Mayor, City Council, and Chamber of Commerce do not understand the noise issue is not just downtown. In 2016, there were 1692 repeat calls made by 452 address. The Chamber and Mayor do not know how many of these were noise calls for businesses or residences, nor do they know how many were downtown. There were no businesses cited for noise violations because the current noise ordinance does not require the business to be fined. Instead the individual is fined. See Sec. 11-50. - Penalty.


Therefore, the police need to produce the citations for the individual that were a result of the business.

From 2016, here are the businesses and residences that have had 4 or more repeat calls reported to Police Dispatch. Sometimes police use the intersection instead of the business or residence. Only way to verify if this was actually for a business is to review the Officer’s notes in the Police Call For Service Report. 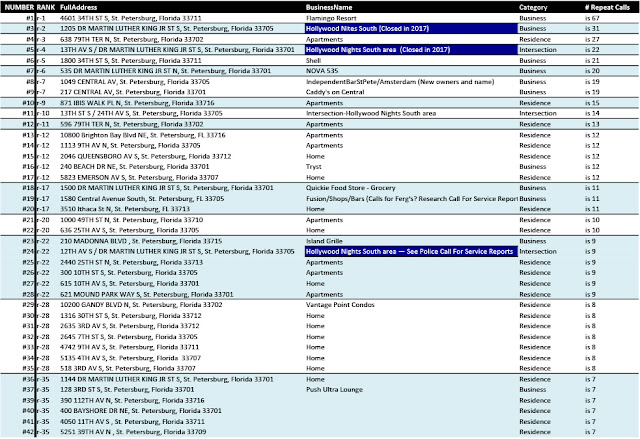 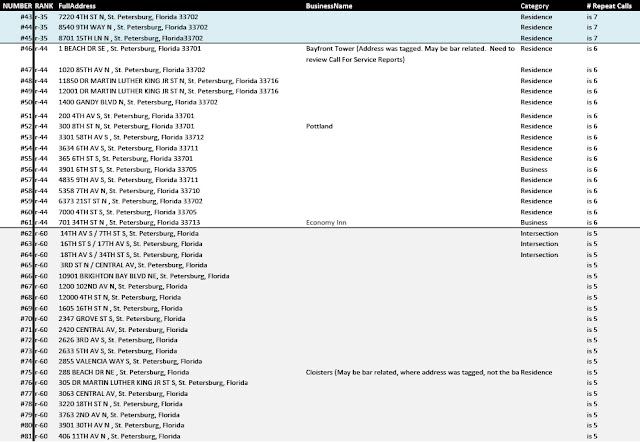 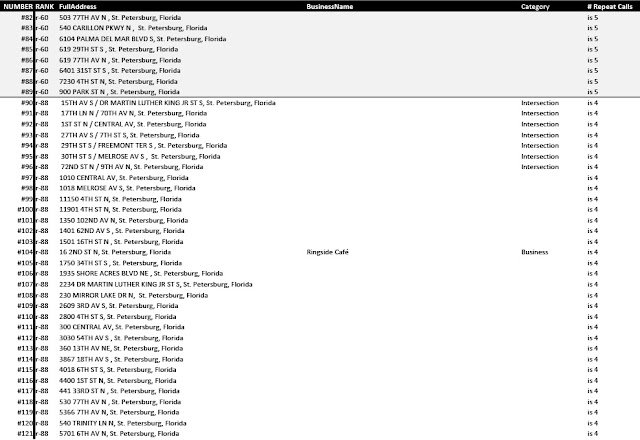 Mayor Kriseman must be transparent and share this data from 2013 to March 2018. He must also share how many businesses and individuals have been cited for noise and ticketed. If individuals were cited instead of the bars, as Chief Holloway and Assistant Police Chief Dente have claimed, then Mayor Kriseman needs to make them produce this. The Mayor needs to show he is interested in protecting residents and publish the data on the City's website for all to see. Enough with these unsubstantiated claims! 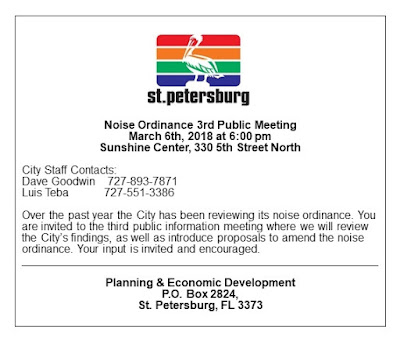