Doing what legislators do best ducking and weaving 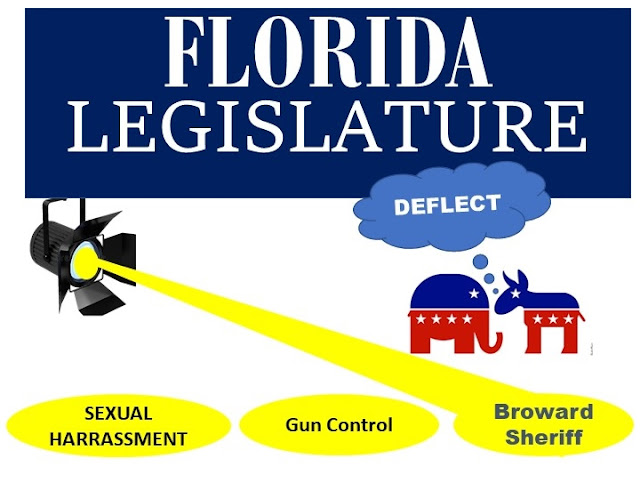 The Florida Legislature is the very best legislature money can buy.

St. Petersburg, Fl
Opinion by: E. Eugene Webb PhD
Author: In Search of Robin, So You Want to Blog.
If you have been watching the news of the school shooting in Parkland and have been captivated by the event and the reactions around the state and the country, you may have missed a not so subtle twist.
If you go back just a couple of weeks, all the media were alive with the Florida Legislature ferreting out sexual harassment, immoral conduct and all the stuff cheap novels are written about.
Problem was all of this was very real in Tallahassee and still is.
Then the shooting in Plantation happened.
The media did a pivot, and as much as you might detest the NRA’s Dana Loesch, who said the mainstream media "love mass shootings" because "crying white mothers are ratings gold," is actually more right than she is  wrong.
If you don’t think so check any of the CNN news shows or any cable news network and take note of the amount of time your local news channel spends on this story and how they all track together. The politicians are leading the news media around by the nose on this one.
Check out this Associated Press writer Darlene Superville article: NRA spokeswoman not softening pro-gun stance
The legislators in Tallahassee felt a momentary breeze of fresh air as their inappropriate harassment antics and bedroom frivolities immediately disappeared from your television screen and local newspapers.
Feeling smug, our outstanding Florida legislators, including all Republicans in the house voted down a gun-control bill.
Then to their great horror, the survivors from Stoneman Douglas, who must have some masterful teachers, began to speak out and suddenly, the Florida Senate and the House found themselves in the center of a firestorm regarding their inability do something about the assault rifle issue.
As the debate heats, up and the students protest in Tallahassee, the legislators do what they do best they deflected.
Ganging up on the Broward County Sheriff Scott Israel, who just happens to be a Democrat, the Republicans all formally called on the Governor to remove him or temporarily suspend him.
Sheriff Israel has a big job running the Broward County Sheriff’s Department with 5800 employees and a $730 million budget.
The news media immediately pivot to the sheriff taking the heat off the legislature as now all of this is somehow the sheriff’s fault.
With the sheriff now on the media hot seat,  legislators can once again sink back in their plush chairs with fond memories of their favorite lobbyist.
In the meantime, women in Tallahassee are still vulnerable; those guilty of misconduct are skating without retribution; kids can still buy assault rifles, and the politicians are still lapping up NRA money and those precious NRA + ratings.
They were saying it when I was working in Tallahassee in the 90s, and it’s still true. The Florida Legislature is the very best legislature money can buy.