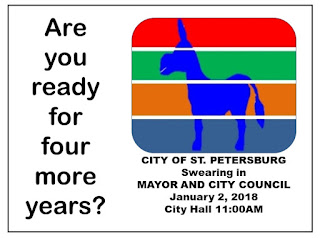 What kind of Mayor will Rick Kriseman be in his second term?

St. Petersburg, Fl
Opinion by: E. Eugene Webb PhD
Author: In Search of Robin, So You Want to Blog

Tuesday January 2, 2018 Mayor Rick Kriseman will be sworn for his second and final term as St. Petersburg Mayor.

What kind of Mayor will Kriseman be in his second term?

Given his approach in his first term regarding the Pier, lying about the sewage mess and his general disregard for what his citizens want and think the expectation is things will get a lot worse.

Kriseman term limits out after the next four years, so he has no motivation to cater to the public’s whims to secure votes for a follow-on term.

What that means is he doesn’t need your vote, and your opinion will count for less than ever.

Kriseman’s legacy is already sealed in the Pier and the ongoing sewer and water rate debacle. There is little he can do to change the facts.

The next major issue on the table is the Rays, and with things looking somewhat cloudy over in Tampa regarding a new stadium, all that money the Rays donated to the Kriseman campaign may turn out to be a good investment.

The Mayor’s passionate desire for a St. Petersburg to be a sanctuary city will continue and his ongoing support for his Chief of Staff Kevin King a known sex offender should make everyone in St. Pete a little squeamish.

Kriseman will be backed up by an overwhelming Democrat majority on City Council, many with political aspirations beyond their City Council seats. Don’t look for any of them to challenge the Mayor because that would-be political suicide.

All in all, 2018 shapes up to be a good year for the donors to Kriseman and the other new Council Democrat’s campaigns.

What to expect? Look for more cost overruns on the Pier, the Pier will probably not be ready on schedule; the south side will get the short end of the stick and don’t be too surprised if a sweetheart deal starts to take shape for the Rays.

Just in case you want to celebrate the beginning of the next four years of the Kriseman administration you're invited to join the City of St. Petersburg for the official Swearing-In Ceremony of Mayor Rick Kriseman and City Council!