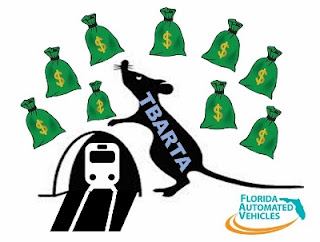 These alternative transportation systems are such things as autonomous vehicles, ride share operations and other emerging transportation technologies.

The Sunday Tampa Bay Times Editorial: Editorial: Legislature should send Tampa Bay transit money without limiting options is all in on sending the “money” without  limitations.

Problem is the money coming to the Bay Area is currently designated in the Bill to go to TBARTA one of the most failed Transit Authorities in the State.

Twenty-five million dollars on a matching basis to the Tampa Bay Area Regional Transit Authority for the design and construction of an alternative transportation system, as defined CS/HB.  One dollar in local or private matching funds must   be provided for each dollar distributed under this subparagraph. Federal funds may not be substituted for the local or private matching funds.

Even after a carefully crafted re-due by the Legislature TBARTA remains hopelessly flawed in is methods, management and implementation.

TBARTA never met a train in did not love, or a consultant that it could not somehow justify hiring. Why you would make TBARTA responsible for a project they basically benefit from if it fails is beyond me.

I cannot even begin to count the number of neighborhood association meetings and City Council sessions over my 28 years with the City of St. Petersburg where some TBARTA consultant, and never the same one, gave a glowing report replete with maps and charts about the progress of some TBARTA project that never came to fruition.

Even with a dollar for dollar match requirement that is currently in the Bill, which in all likelihoods could quietly disappear, the TBRATA folks who are much more creative at dealing for dollars than they are at building transportation systems will find some way to get their paws on the $25 million.

Given TBARTA’s past track record the chances of any of the State money or the matching funds actually ending up in a Bay Area rolling transportation solution are remote.

The Times has this one all wrong. The first place to start is cutting TBARTA completely out of this picture and wrapping these funds up in requirements for rolling deliverables not consultant reports.

TBARTA will hire a staff to “manage” this program, open up the consultant’s feeding trough and spend most of the money trying to figure out how to throttle alternative transportation systems, so we can get back to their view of the real transportation solution light rail and transportation redevelopment.