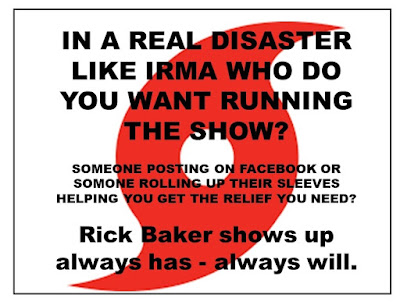 On Wednesday, September 13, 2017, former Mayor Rick Baker tapped his current boss and other allies to help open a FEMA Disaster Recovery Registration Center where people would have access to the FEMA online site to register for disaster relief.

The center at 6090 Central Avenue, an Edwards property,  also had limited cell phone charging stations and free food for those who dropped by.

Details are in the Tampa Bay Times by Charlie Frago: Rick Baker to assist in opening of FEMA Disaster Recovery Registration Center

The Kriseman administration took the hint and opened the Enoch Davis Center and the Sunshine Senior Center starting about noon on Friday the September 15, several days after the Edwards/Baker registration effort began.

Note that the centers were closed over the weekend.

It seemed a bit like a halfhearted effort given the number of City employees and citizens who would have likely volunteered to work at the City locations over the weekend.

Of the Baker/Edwards effort FEMA spokesman Keith Clair said. "We're just glad they're helping people get their information entered into the system."

If you need more in formation on FEMA check out: Tampa Bay Times Staff, Need FEMA assistance after Irma? Here's what you need to know.

The Kriseman administration seems to be providing a lot of visuals and broad statements about IRMA not a lot of hands on directed attention.

For example: Kriseman posted on Facebook, “I am extremely disappointed that Duke Energy's self-imposed midnight deadline will pass without power being restored to all of St. Pete. The information provided to me by Duke Energy's CEO and other executives throughout the week gave me the confidence to be patient, and as such, I had encouraged the same from our residents.”

You can assume that the Duke CEO or at least someone close to the CEO’s office follows Facebook, so they got the message.

There is, however, no indication that Kriseman picked up the phone and actually talked to anyone at Duke Energy. He did request a meeting with Duke Energy Officials, no indication if they have accepted the invitation.

The real difference between Baker and Kriseman continues to show up.

You can bet in a situation like this Rick Baker would be communicating directly with the DUKE CEO, not via Facebook.

Baker is a proactive leader who steps out and takes action for his City while Kriseman likes to hang back, wring his hands and blame others when things go wrong.