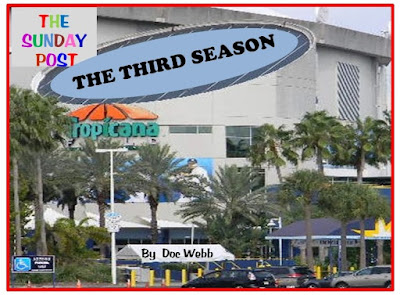 There is plenty of money available in Pinellas and Hillsborough Counties to do this deal.

I have defined the Tampa Bay Baseball "Third Season" as that time between the last world series game and the start of the spring training media hype or roughly late October to late February.

This is the time when the Rays usually beat the drum loudly complaining about poor attendance blaming it on Tropicana Field and lack luster appreciation of the sport by the local population.

With the dawn of 2018, the Rays have just nine years left on their lease agreement with the City of St. Petersburg. That may sound like a long time but when it comes to new stadiums, the time window from start to first pitch could consume most of that time.

Tampa and the Baseball interest group, more or less headed by Hillsborough County Commissioner Ken Hagen, has been busily looking for sites for a new stadium, and it looks like they have settled on a site at the edge of Ybor City.

Stu Sternberg and the Rays played coy at the initial announcement offering: “This is another step in the site selection process, and we are grateful for the time and attention that went into making it an option, along with those in Pinellas County, including the Tropicana Field site as a potential future home for Rays Baseball in Tampa Bay for generations to come."

Here is a peek at a concept drawing for the new Rays home from the Tampa Bay Times by Adam Sanford: This is what the new Rays Ybor stadium could look like.

Sternberg, after waiting to see if the $100,000 contribution to the Kriseman campaign in the St. Pete Mayoral race would pay off, threw Tampa the first pitch of the Third Season, a low and outside slider offering to pony up about $150 million.

That leaves Tampa and Hillsborough County with about $600 to $700 million to find. For some details see: Marc Tompkin, Tampa Bay Times Staff Writer: Sternberg: Tampa Bay Rays' share of new ballpark could be $150 million.

There is plenty of money available in Pinellas and Hillsborough Counties to do this deal. And yes, there are some big players in Pinellas County that would gladly “help” the Rays exit the Trop site.

I think the key in all of this is Major League Baseball. The league and the owners do not want the Rays in St. Pete. That has long been clear.

MLB could remove a lot of the fog around this deal if they simply said we will not support a new stadium in St. Pete regardless of the deal – the Rays are moving. That would clear the deck for Hillsborough County and Tampa, but it might be taking away a bargaining chip for Sternberg, so such a pronouncement is unlikely.

Kriseman could also put an end to what will be a messy negotiation, by simply saying there is a better use for the 80 plus acers on the Tropicana Field site than Baseball, so Rays/MLB if you want to build and completely pay for a new smaller stadium on the site, we will hold a parcel for that project as we prepare our redevelopment plans.

Also, unlikely - but just for the moment.
There will be a lot of pressure on Kriseman to put together a competitive bid, offering to put up some money from the City and Pinellas County so Sternberg has some leverage, but that is just smoke and mirrors because MLB, and the owners will never go along with a St. Pete deal.

Time is wasting. This Third Season only lasts until Spring Training starts ramping up in late February, so all parties need to get moving.

Commissioner Hagen and his group need to take a cautious look at Sternberg’s first pitch. Take it as a ball or better yet foul it off. There are better pitches coming.

I seriously doubt much will happen in this Third Season. It will be a lot like watching two Great Blue Herons mate. A lot of wings flapping, some careful dancing, a few coy looks but not much action.