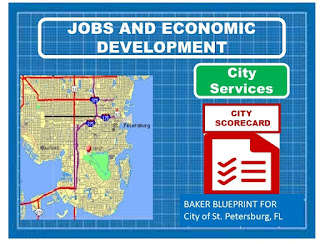 We will immediately put back online the City Scorecard

This is the eighth of a eight-part series detailing the Rick Baker Plan for St. Petersburg

From the Rick Baker BLUEPRINT for St. Pete

For more than eight years as Mayor, Rick Baker worked to transform St. Petersburg into a modern, prosperous, safe, neighborhood- friendly and seamless city. From jobs and economic empowerment, to schools, neighborhoods, the arts, our environment, and public safety, this “blueprint” will guide Rick Baker’s efforts to restore competence, commitment and honesty to City Hall.

Any successful city must have great jobs and a vibrant economy so all residents can earn the type of living that provides the greatest opportunity for themselves and their children. That is why I want St Pete to once again become a dynamic leader on this front, leaving no one behind.

A city must provide great services in the most cost efficient way. Our city should and will track how it is doing and how we can improve.
CITY SCORECARD:
We will immediately put back online the City Scorecard, performance measures in readable, graph form measuring significant aspects of the city’s success in accomplishing the plan moving forward. The scorecard becomes a management tool to improve all operations of the city – across the board. I don’t understand why our current mayor removed the City Scorecard and I believe that every taxpayer has a right to know how our government is performing.
Examples of City Scorecard metrics include school performance, crime rates, permitting turnaround, emergency response time, sidewalk and pothole repair time, tax rates, trees planted, sewer repair progress, bridge replacement and others – 160 measures altogether across the five strategic areas of Public Safety, Neighborhoods, Schools, Economic Development and City Services. This information belongs to the people of St Petersburg, open and available for all to see. It will be constantly reviewed by our internal auditors to prevent political tampering.
SEWER SYSTEM: The criminal and civil investigations of the Kriseman administration’s sewage spill, and the Florida Fish and Wildlife report that followed, have made it clear the cause of the crisis was Mayor Kriseman’s premature shut-down of the Albert Whitted Treatment Plant, along with his refusal to re-open the plant after his first spill of 31 million gallons occurred four months after the closure. Trust me, I will be rolling up my sleeves and aggressively addressing this area on Day One.
We will immediately work with state environmental regulators toward the goal of reopening the downtown sewer plant (treating up to 25 million gallons per day) which 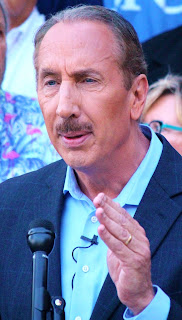 was prematurely taken offline by the current mayor. The problem is complicated by his efforts to dismantle portions of the plant.

We will continue efforts, accelerated during my administration, to repair and upgrade our sewer plants and distribution system. This includes seeking budget support from the state for new infrastructure, and devising a plan to reduce the financial impact on the rate paying public – especially those in low income categories – who now face soaring utility bill hikes.
Most importantly, I will openly and honestly tell the citizens what’s going on, even if it’s bad news, in contrast to the current mayor who consciously and purposely misled, misinformed and lied to us about the cause of the spills and the existence of sewage pollution in Clam Bayou and in our west side neighborhoods. We will also create an atmosphere where employees can feel safe telling the truth; today employees are seeking whistle-blower protection from City Hall insiders so they won’t be punished for telling the residents what’s going on. I will also work closely with City Council, keeping them informed and in the loop – not treat them as afterthoughts as has happened in the recent past.
REAL ESTATE TAX RATE: The real estate tax rate under the current administration is about 14%+ higher than my last budget in 2010. During my term I had reduced the tax rate by almost 20%. We will evaluate opportunities for tax rate reduction in light of recent record levels of revenue coming into the city, but record expenditures going out by our current mayor. There has been an indifferent disregard by our current mayor of the costs he is putting on the taxpayers and ratepayers of our city. That approach will end!

STORMWATER SYSTEM: We will work with USF Marine Science and others to evaluate and modify the existing storm water improvement plan in consideration of existing needs and projected sea level changes!

The “blueprint” by design is a living document that will evolve with further input from you, the people of St Petersburg, to enhance the quality of life for everyone living here. - Rick Baker
E-mail Doc at mail to: dr.gwebb@yahoo.com or send me a Facebook (E. Eugene Webb) Friend request. Be sure to follow me on Pintrest (Doc Webb),  Like or share on Facebook and follow me on TWITTER  @DOC ON THE BAY.
See Doc's Photo Gallery at Bay Post Photos.