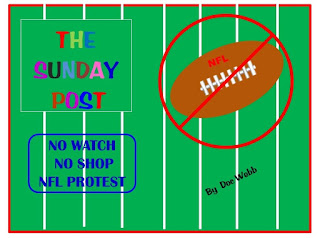 No Watch No Buy - send the NFL a message

I am five weeks or so into my personal NFL boycott, no football, no NFL network, no ESPN, no products from companies that support the NFL.

So far, so good. I have been keeping a rough running estimate of the products and money I have redirected and so far; it is somewhere between $400 and $500.

Interestingly, I have tried a few new brands, and it looks like I will be permanently switching to several of them, not do so much to the NFL and the player protest, they are either cheaper or better.

"Like many of our fans, we believe that everyone should stand for the national anthem. It is an important moment in our game. We want to honor our flag and our country, and our fans expect that of us.

"We also care deeply about our players and respect their opinions and concerns about critical social issues. The controversy over the Anthem is a barrier to having honest conversations and making real progress on the underlying issues. We need to move past this controversy, and we want to do that together with our players."

Goodell said, "We just had two days of conversation with our owners. Our clubs all see this the same way. We all want our players to stand," Goodell said at a news conference, adding that he understood why some people were upset that some players weren't standing for the anthem.

But he said the league wouldn't force players to stand during the national anthem — instead, he said, the league and the owners continue to listen to the athletes and discuss the issues they are concerned about.

Talk about gutless and wishy washy. Maybe Goodell and his big dollar buddies need to take a second look at ratings and attendance. If this thing gets away from them, it could spell disaster for the NFL.

I like the lady who asked for her 2018 ticket deposit money back and the guy who paid to fly the protest banner. I agree with her statement; the players can protest all they want but in that stadium, they are on my dime, and I don’t appreciate it.

Maybe a national ticket refund effort and if the NFL balks (I know wrong sport) maybe a high-profile class-action lawsuit for refunds along with pulling those sweetheart tax and stadium deals.

Perhaps the solution is to let the players in uniform, kneel, jump up and down, roll around on the ground carry signs outside the stadium, and then go inside the stadium and respect the country, the flag and those who gave all for their right to protest.

Do not underestimate the power of your individual no watch, no buy protest. I changed grocery stores for large purchases from the local one that is the Buccaneer’s “official grocery store” and if enough people quietly do things like that the people paying the big bucks for advertising may just have some second thoughts.

That could leave Mr. Goodell with a decaying heap of nothing.

For now, we are doing great without the NFL. I plan on spending Sunday afternoon at the beach.